A functioning Apple 1 computer, one of the first 200 computers sold by Steve Jobs and Steve Wozniak, sold for $374,500 including the 12% buyer's premium at a Sotheby's action in New York. The Apple 1 originally sold for $666.66. The BBC notes that only about 50 Apple 1's still exist and only a handful actually work.

Sotheby's said there was a battle between two parties for the item which also included the original manuals. A set of bids were executed by the auctioneer on behalf of an absentee collector, but a telephone bidder proved more persistent and eventually clinched the sale. 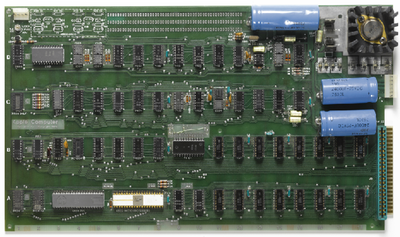 
Some people like to collect things. The first product hand-built by one of the founders of one of the most storied corporations in world history might be an interesting thing to collect.
Score: 36 Votes (Like | Disagree)

applesith
Might be easier to find one of those than the Retina MBP.
Score: 31 Votes (Like | Disagree)

I have a customer, who worked with Woz, during his time at HP. On my second visit to him we talked about older Macs. I waxed lyrical about my original Macintosh and he listened intently. He then told me that he had a collection of old Macs out in the garage that he would show me sometime. On my third visit, he duly obliged.

Neatly laid out on three shelves were 6 Apple II computers, 4 of which worked fine. He then pulled a fabric cover off the stuff on the bottom shelf to reveal three Apple I computers. I was assured that two of them were fully functional and that he also had complete paperwork and packaging for them. Was he not a very ill, wheelchair-bound man, i would have asked to see them running.

I was then shown an email conversation between him and Mr Wozniak. They had remained in touch with each other and Woz had promised that he would fix up his broken II's and I, if possible and would be sure to pack his soldering iron if he was ever visiting the country.
Score: 23 Votes (Like | Disagree)

Stetrain
How do they expect anyone to take this seriously when the RAM is soldered straight to the logic board?!

There are a bunch of personality disorders that can fit your answer: Narcissism, borderline...

It is amazing paying that much money for a piece a plastic that does nothing not even regarding the history behind it.

I mean, imagine the person having that circuit board in a pedestal just to "show off". Imagine how much that person need for people approval that he/she needs to spend that amount of money. That is a personality disorder.

I mean, the Mona Lisa is a piece of art that is unique and extraordinary. This Apple One is not, it was replaced a few months later for another version that was better. But do not try to explain that to someone with that ego.

Hey, more power to the buyer. But from my perspective, I ask why? Why pay that much for it and what could I do with it, aside from looking at it, pointing and saying "well, there it is."


Answer: Because what people choose to do with their money is, frankly, none of your business.
Score: 11 Votes (Like | Disagree)
Read All Comments