Late last month, we noted that Apple's founding corporate papers were headed up for auction, with Sotheby's estimating that the documents would fetch in the range of $100,000-$150,000. The set of documents included the original three-page contract signed by Steve Jobs, Steve Wozniak, and Ron Wayne, as well as several other documents related to withdrawal from the company just 12 days after it was founded. 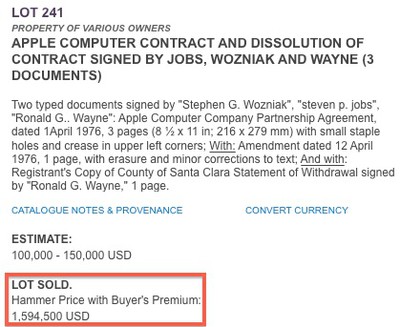 According to the Sotheby's auction page for the documents, which are part of an ongoing sale of fine books and manuscripts, the lot sold for $1,594,500, considerably higher than the pre-auction estimates. That price includes a buyer's premium of 12% paid to Sotheby's.

The identity of the winning bidder has not been revealed, but the seller was identified last week as Wade Saadi, who purchased the documents from Ron Wayne in 1994 for "several thousand dollars".

Update: Sotheby's appears to have removed the final sales price from the auction listing for unknown reasons. Fortune reports that the winning bid came in via telephone at $1.35 million, although that figure apparently does not include the buyer's premium.

Update 2: As reported by the BBC, the winning bidder was Eduardo Cisneros, an executive whose Miami-based company owns stakes in a number of different companies.

furi0usbee
The seller was identified last week as Wade Saadi, who purchased the documents from Ron Wayne in 1994 for "several thousand dollars".

LOL.. Wayne just never did stop making bad business decisions... I really feel bad for that guy. At least he has a good sense of humor.

Fazzy
Hey its either these original documents or 320 12 core Mac Pros. Take your pick :D
Score: 6 Votes (Like | Disagree)

SandboxGeneral
Thats a lot of money for some paper with their signatures. I guess I just don't get it. What in the world is the buyer going to do with them?

Personally, I could find better things to spend $1.6 million on.
Score: 3 Votes (Like | Disagree)


You beat me to it! Poor Ron. Anyway, I suspected these would go for big bucks. You basically have the blueprint for one of the most storied businesses in all the world. It's a good thing I don't have the money. I would have dropped as much on these.