Back in late 2009, an Apple patent application surfaced showing that the company had explored ad-supported operating systems, with the user receiving free or discounted goods or services in exchange for viewing the advertisements. The patent application, which was filed in 2008 and shows ad integration in Mac OS X, was notable for listing Steve Jobs as the lead inventor. 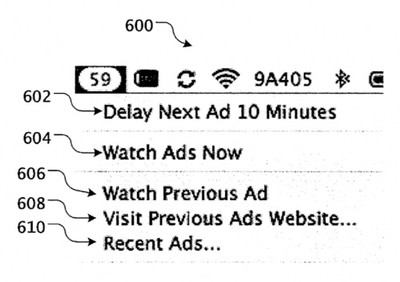 As Ken Segall reveals in his new book, Insanely Simple: The Obsession That Drives Apple's Success, the idea did indeed belong to Jobs, although he initially considered implementing it for the 1999 release of Mac OS 9.

Rather than charge the normal upgrade price, which in those days was $99, he was thinking of shipping a second version of Mac OS 9 that would be given away for free – but would be supported instead by advertising. The theory was that this would pull in a ton of people who didn't normally upgrade because of the price, but Apple would still generate income through the advertising. And any time an owner of the free version wanted to get rid of the advertising, he or she could simply pay for the ad-free version. Steve's team had worked out the preliminary numbers the concept seemed financially sound.

Jobs envisioned the ad-supported version of Mac OS 9 displaying a 60-second commercial from a "premium" company at startup, with the ads occasionally being automatically swapped out for new ones over the Internet. He also visualized the use of contextually relevant ads, such as an Epson printer ink ad being displayed when the user's printer was reporting that it was low on ink.

Segall was not in favor of the idea, but left that meeting under the impression that Apple was going to proceed with it as the TBWA\Chiat\Day team begin thinking about the premium companies it could target for high-quality advertising. But for whatever reason, Jobs and Apple ultimately decided to scrap the idea.

But while the genesis of the idea indeed appears to lie with Jobs, it is still unclear why Apple decided nine years later to file for a patent on the idea, whether it was due to a serious reconsideration of the idea or merely a tying up of loose ends that saw the company attempting to protect one of Jobs' ideas that had already been discarded.

AQUADock
Glad it didn't become a reality, and I hope it stays that way.
Score: 32 Votes (Like | Disagree)

whooleytoo
Yuck. Although if it were released today, the ad mechanism would probably be hacked and disabled within weeks if not days, so it wouldn't make much difference.

By comparison now, we get a hell of a better OS for under 30 euros, without adverts. I know which one I'd pick.
Score: 27 Votes (Like | Disagree)

I think Apple should sell this patent to Google. They are the ones who deserve it.
Score: 24 Votes (Like | Disagree)

Let's keep it a patent, ok?

You've given me an idea. I think I'll go out and patent ever objectionable feature I can think of - not to make money, but to prevent them ever seeing the light of day!
Score: 21 Votes (Like | Disagree)

deannnnn
I mean, it makes complete business sense as to why this would exist, and therefore it's technically a good idea... but thank God it doesn't.
Score: 21 Votes (Like | Disagree)
Read All Comments