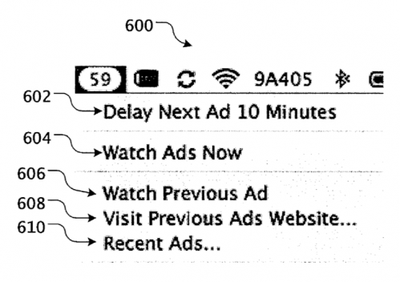 In an unusual patent application filed in 2008, Apple explores the possibility of integrated ads into an operating system. The graphics provided even show how it might be integrated into Mac OS X (see above). In exchange for the ads, the user would receive some goods or service for free or discounted:

In the late 90's, ad-suppprted products including getting free computers were offered to customers in exchange for viewing advertising, though the practice has since fallen out of favor. It's unclear if Apple had any real intentions for the concept, though Steve Jobs is listed as one of the inventors of the patent.

Of interest, Microsoft is reportedly working on an ad-supported version of Microsoft Office.

Friday May 7, 2021 6:55 am PDT by Sami Fathi
According to Apple leaker Jon Prosser, Apple's upcoming release of the MacBook Air will feature various colors, similar to the colors in the newly released 24-inch iMac. In the latest video of his YouTube channel Front Page Tech, Prosser says the same source who accurately provided him information on the first Apple silicon iMac coming in colors has told him that he recently saw a prototype...
Read Full Article • 345 comments

Sunday May 9, 2021 2:00 am PDT by Sami Fathi
Zoom, a hallmark platform used by millions during the global health crisis, has been given access to a special iPadOS API that allows the app to use the iPad camera while the app is in use in Split View multitasking mode. This case of special treatment was first brought to attention by app developer Jeremy Provost, who, in a blog post, explains that Zoom uses a special API that allows the...
Read Full Article • 264 comments