Apple's share price touched the $600 mark as trading opened this morning, just a month after reaching $500/share for the first time. The stock has, however, pulled back slightly since the open and now sits at $594.

The stock price has been on a tear ever since Apple reported blowout earnings for the first fiscal quarter of 2012, rising nearly $180/share, or close to 40%, in under two months. 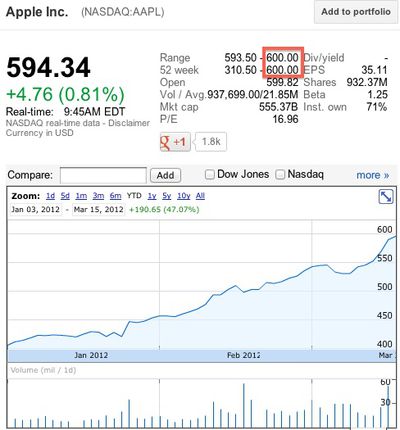 At the end of February, Apple broke through the important psychological barrier of $500 billion in market capitalization. Apple is the most valuable publicly traded company in the world, worth nearly $560 billion, more than $150 billion higher than second-place ExxonMobil.

Apple is now within $50 billion of claiming the "most valuable publicly traded company ever" title. According to the S&P, Microsoft had a peak market cap of $604 billion during the dot-com boom in December 1999. Adjusted for inflation, Microsoft was worth $813.42 billion in January 2012 dollars at its peak, and Apple would have to reach $873/share to surpass that total.


A company's value has nothing to do with gravity.
Score: 49 Votes (Like | Disagree)

AJayAgliolio
Wow, imagine how rich Forrest Gump would be today with all his Apple stock... :P
Score: 19 Votes (Like | Disagree)

It's as I told a close friend yesterday, buying AAPL is not an investment strategy. There are two important words there: "investment" and "strategy".

Investment requires active research, and making decisions not based on speculative plays but a sound analysis of the value of the asset being acquired. Hearing about a company as ubiquitous as Apple and then jumping on board on the assumption that it'll keep going up (remember the housing market?) is not investing.

If all of Apple's enterprise were struck by a meteor tomorrow and wiped off the face of the planet, would the average Apple speculator be well insulated from that catastrophe in the rest of their portfolio. Would their "sit and presume infinite growth" tack work with the broader market?

If the answer to questions like these is "no" then whatever else you want to call it, it's not investing, and it's not a strategy.

Spend less time beating yourself up for "shoulda, woulda, coulda" on a company that could have just as easily gone the other way... and start beefing up your knowledge of investing, and insulate yourself against potential catastrophic loss. THAT, and not consistent huge wins, is what will growth your wealth tremendously in the long term.

Chasing unsustainable returns is a sure fire way to expose your principal to risk of loss... and that kind of loss compounds over time. I don't miss the AAPL boat because I have much more stable long term investments that are actually providing pretty stellar returns, very close to Apple's.... but without the volatility of the umpteen zillion speculators who are all sitting and hoping with their eyes closed and ears shut.

I'm not saying that Apple will do terribly, but Apple's book value is well below 600 dollars per share. So the difference is owing entirely to speculation on where they will go in the future. That works perfectly as long as Apple keeps producing double digit growth infinitely... but its the "infinitely" part that is a statistical impossibility. Growth rates have to shrink at that scale because a) Apple is gaining share of wallet much faster than the number of wallets or size of wallets is increasing, and b) Apple has to produce exponentially more marginal revenue each quarter just to maintain the same growth rate mathematically.

And then there's the Steve factor... any time a business's image and success are so inextricably tied to an iconic figure you cannot top that. No one will ever take the reins of Apple with a greater vested interest than Steve had. No visionary of Steve's caliber will prefer to work for Apple over starting his own company.

A shrewd investor is like a good hockey player... skate to where the puck is going next, not to where it is now.
Score: 13 Votes (Like | Disagree)

Anyone got a time machine? Would love to go back a few years...


Yeah to 1975 to meet Steve and become an original investor in the company.
Score: 9 Votes (Like | Disagree)

Stetrain
Imagine how high it would be if the iPad 3 hadn't been so disappointing :rolleyes:
Score: 8 Votes (Like | Disagree)
Read All Comments