Apple's share price pushed through the $500 barrier as trading opened this morning, reaching an important psychological figure. The stock price has been on a tear ever since Apple reported blowout earnings for the first fiscal quarter of 2012, rising more than $75/share, or nearly 18%, in just under three weeks. 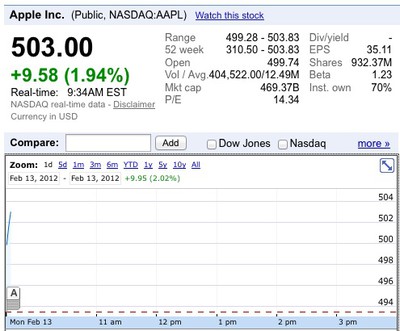 Apple is a long way from claiming the "most valuable publicly traded company ever" title. Among many others, Microsoft had a peak market cap of $642 billion during the dot-com boom in September 2000. That company is now worth just over $250 billion. With the reversal of fortunes, Apple is in fact now worth more than Google ($199 billion) and Microsoft ($256 billion) -- Apple's two biggest competitors -- combined.

1080p
Wow... I should bought some APPL instead of buying their products. :D
Score: 9 Votes (Like | Disagree)

Small White Car
I convinced my mother and my father-in-law to buy a lot at $150. I'm now 'favorite child' on BOTH sides of the family.

See? You can win at the stock market even if you don't have money to invest!
Score: 7 Votes (Like | Disagree)

What goes up must come down ;)


Or go even higher. This will be a huge year for Apple.
Score: 6 Votes (Like | Disagree)

mrxak
Every so often, I think about buying AAPL. Every time, I don't, because it's way too much per share, and every time, I regret it later when it hits some crazy high price later on like this. I honestly think it'll keep going up, but unless they split the stock, it's going to be hard for many individual shareholders to invest.

Expect news in a few days about several big executive sell-offs as pre-planned sales at specific prices kick in automatically. Also expect idiots to say stuff like "what do they know we don't?!?" and "Apple is doomed without Jobs!" Then, expect AAPL to keep climbing without a hitch.
Score: 6 Votes (Like | Disagree)
Read All Comments

Wednesday June 23, 2021 5:07 am PDT by Sami Fathi
Apple earlier today published a detailed report outlining in blatant terms the negative impact that sideloading would have on the iPhone and iPad, specifically calling out the impacts it would have on user privacy and security. Now, the company is continuing its PR push, with an executive noting in an interview that users who wish to sideload apps already have that option thanks to other...
Read Full Article • 370 comments