Wednesday February 15, 2012 7:21 am PST by Eric Slivka
Just as Chinese authorities have indicated that it would be difficult to impose a ban on Apple's iPad over a trademark dispute, Tech in Asia notes that the popular tablet has gone missing from online stores at Amazon China and Suning.com. 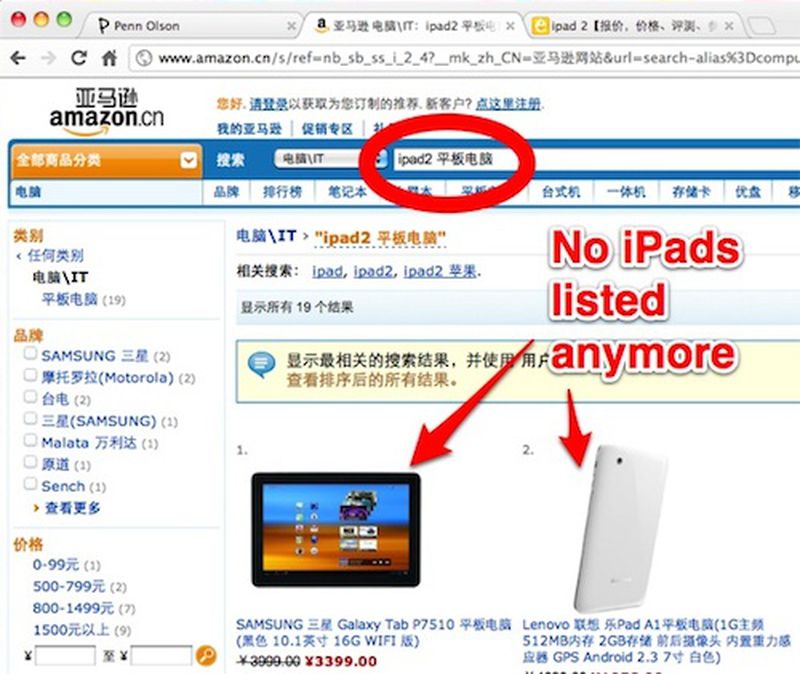 The removal is apparently not, however, the result of a request from Proview Technology, which is laying claim to the iPad trademark and which has been seeking to halt both imports and exports of the device in China. The company's efforts earlier this week resulted in local Chinese authorities seizing a small number of iPads from retailers as others removed their stocks from display to avoid the seizures.

M.I.C gadget reports that the removal of the iPad from sale at Amazon China and Suning.com is actually by Apple's request, although the reasons for the move are not entirely clear.

According to an Amazon China spokesman, the withdrawal is on the notice of Apple and also it’s the adjustment on its sales strategy [...]

Meanwhile, Apple has not made any comments on the issue, and Apple’s staffs in China refuse to reply too. However, as confessed by the lawyer of Proview, Proview did not apply for the administrative ban on the online sale of iPad in Beijing where Amazon China is located; also he has no idea about Apple’s demand for the iPad withdrawal from Amazon China.

The dispute over the iPad trademark in China relates to a deal Apple made with the Taiwanese arm of Proview under which it claims it received the rights to the mark in China. But Proview's Chinese arm has argued that it controls the rights to the trademark in China, and thus Apple's deal with the Taiwanese subsidiary could not have included rights for mainland China. Chinese courts have sided with Proview in the dispute, but Apple is appealing the ruling.

WTF? Commie Amazon sell the iPads but the US Amazon don't? :mad:


Why do you head over www.amazon.com and do a search for Ipad and see for yourself. But Karma is a bummer..
Rating: 6 Votes

hissyfit
I am glad I am not living in China. Ha! Ironic, you can make one but you can't have one.
Rating: 5 Votes

jerdo
Ridiculous that China is enforcing copyright as the country is the largest infringers in the world.
Rating: 4 Votes

kolax
I imagine this was voluntary from Amazon China in order to avoid any lashing from Proview. This will be temporary once the Chinese authorities iron it all out.
Rating: 4 Votes

ericinboston
Not to fear...a Chinese Apple employee claims that the iPads will be back "in 10 minute!"

Chinese customs authorities have indicated to Proview, the Chinese company that is locked with Apple over the iPad trademark in the country, that a ban on the importation and exportation of Apple's touchscreen tablet would be "difficult to implement" because of the popularity of the device in the region.

I don't say it's right. But didn't Proview Taiwan break the law as well by selling rights they didn't have and aren't they a 100% substity of Proview China?


Then Apple must sue Proview Tawian, don't they?
Rating: 2 Votes

So, if there is demand freo a product it is right to break the laws?


I don't say it's right. But didn't Proview Taiwan break the law as well by selling rights they didn't have and aren't they a 100% substity of Proview China?

In other words, let's say Microsoft founds a company called Mircosoft Ltd. and sells patents and names and then claims that the "Ltd." was not having the rights to sell those names and now a few years later sues everyone over that and defaulting their Ltd. - would that be right? Would you argue that a company using the name Excel is at fault because they bought the name from Microsoft Ltd. and "should have known" that they waste their money because Microsoft Ltd. is a sub of Mirocoft Corp. who owns the TM? How does anyone actually know the interna of companies with subs all over the world? You have to trust them when you buy rights.
Rating: 2 Votes

Yea, either prep for iPad 3 or/and a warning shot that they might flex muscles pulling the iPad from the Chinese market (at least for 2-3 weeks) until the Government high-ups pull strings because their kids demand that "Daddy party secretary" calls the judges to set them straight. :cool:

So, if there is demand freo a product it is right to break the laws?
Rating: 2 Votes

Still not racist. Nor is it a murder charge. Or a wheelbarrow tire. Words mean things, quit trying to change them.


I'm not. You can not accept the facts. Many people would consider it a very bad thing to say. You've never lived under a communist regime I see. One member of my family has. Russian communism back in the 1950's. If you said something like that around there, off to Siberia you went.

Yes words mean things. But that word is considered very offensive by some people. Not by me or the people where I live. But in other parts of the world it IS a very offensive term.

If you can not understand this then I'm done. Cause no point arguing with someone who refuses to listen.
Rating: 1 Votes