Sunday February 12, 2012 11:23 pm PST by Eric Slivka
Last week, we offered an update on the ongoing trademark dispute in China between Apple and Proview Technology, which claims to have held ownership of the "iPad" trademark there since 2000. Apple is said to be facing a potential fine of approximately $38 million from the government while Proview is seeking as much as $1.6 billion in damages. 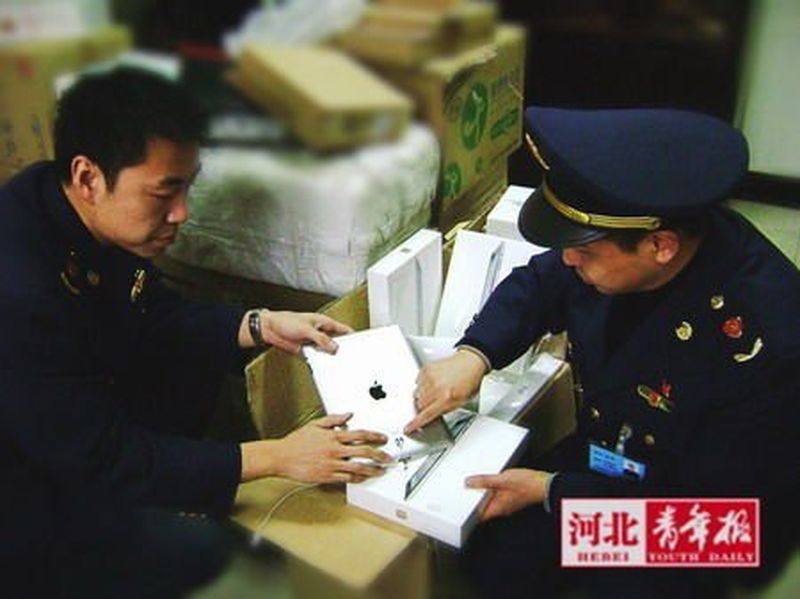 According to new reports from DigiCha (via The Next Web) and China.com.cn [Google translation] , authorities have begun taken steps related to the trademark issue, confiscating iPads discovered in retailers' shops while other retailers move proactively to remove the devices from display in order to prevent their stocks from being seized. DigiCha reports:

Apparently as a result of the Proview iPad trademark infringement verdict, some local Administrations of Industry and Commerce (AIC) have started to confiscate Apple ($AAPL) iPads they find on sale. The article claims that many stores and resellers have taken the products off their shelves to avoid discovery by authorities, but if you ask for an iPad you can still buy one.

China.com.cn notes that as of 5:00 PM yesterday authorities had seized 45 iPad 2 units from retailers, but it remains unclear whether the actions are part of an nationwide effort or if local authorities are acting on their own initiative to address the issue.

Apple believed that it had acquired the rights to the iPad trademark in China in an earlier $55,000 deal with Proview's parent company that also included European rights. But Proview's Chinese arm has argued that the Chinese rights could not have been part of the deal because those rights were not controlled by the parent company.

Apple lost a lawsuit challenging Proview's claim on the trademark late last year, and Proview is continuing to press its infringement case against Apple.

How much will China lose in economic activity if Apple left the country?
Rating: 36 Votes

alphaod
Sounds more like some local government is using the opportunity to take iPads for their own use. I wouldn't be surprised.
Rating: 33 Votes


How much will China lose in economic activity if Apple left the country?

kuato
sounds like a good old fashion shake down to me
Rating: 15 Votes

How much will China lose in economic activity if Apple left the country?


Exactly. This is so flippin' lame. China is, without a doubt, the single largest nation of copyright, trademark, and content counterfeiters in the world. They don't realize a stable and growing capitalistic society is based on strong property rights. When property rights are arbitrarily enforced or ignored, it really cuts back on people wanting to invest in that country.

Foxconn is moving production to Brazil. If this type of crap continues in China, companies will stop manufacturing and/or doing business in China. It don't matter how lucrative the Chinese market is if they can arbitrarily pull this kind of crap on you. It's like Venezuela. Anybody left out there who wants to invest in Venezuela where your business could be nationalized on a whim? I think not.

There are many other emerging economies and markets like Brazil, India, Eastern Europe, etc.
Rating: 11 Votes


Actually China is behaving more and more like a corporation....
Rating: 8 Votes


Yeah, Apple is a big company in the U.S., but it is still just one company, which is only a tiny fraction of all manufacturings in China.
Rating: 8 Votes

Peace
Sounds to me like China wants knock off iPads to outsell the real deal.
Rating: 7 Votes

Yeah, it's the entire Chinese state apparatus that's the little guy, not Apple.

That's the thing about the Chinese - they refuse to enforce anybody's rights but their own perceived rights. It doesn't matter how big a customer Apple is: they're the biggest electronics company on the planet. If they were forced to leave (or more likely withdraw the iPad from sale, or sell it under a different name), it would do a lot of damage to China's credibility.

China needs its credibility. It's not the only country with a demographic boom and massive cheap labour force. India beckons.


This is just a ridiculous statement. I'm American, so I'm not trying to defend the Chinese, but I find the level of anti-Chinese sentiment in the US increasingly intolerable.

What's at issue is a trademark right under CHINESE LAW. Apple's lawyers f*cked up and didn't realize that they weren't assigned rights to the iPad trademark in China. This is not about the Chinese enforcing their rights (whatever that means). It's about a Chinese court enforcing simple trademark law in China. Just so happens that this case involves a well-known American company, but frankly this ordeal is all Apple's own fault and not a political matter. Now the ultimate resolution may be a political matter, but that remains to be seen.
Rating: 5 Votes