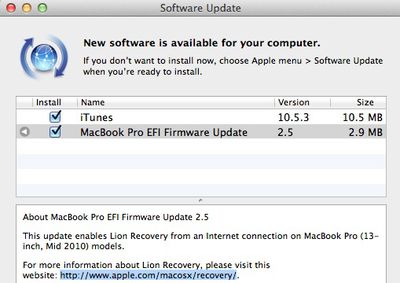 The update has not yet appeared on Apple's support downloads site, but weighs in at a small 2.9 MB for the user who posted the Software Update screenshot.

Lion Internet Recovery debuted alongside OS X Lion on new MacBook Air and Mac mini models introduced last July. The feature adds a minimal bootable install onto a machine's firmware to allow it to connect the Internet and download the full Lion operating system for installation. OS X Lion by default installs a recovery partition on the machine's hard drive for this purpose, but for users who are installing a blank hard drive or whose recovery partition becomes inaccessible, Internet Recovery provides yet another fallback option for Lion installation.

Following the July introduction of Internet Recovery on the current MacBook Air and Mac mini models, Apple extended the feature in mid-September to the then-current Early 2011 MacBook Pro models that had been released in February 2011. One month later Apple brought the feature to Apple's current-generation iMac line, leaving only the aging Mac Pro without support for Internet Recovery.

With today's firmware update, Apple has for the first time reached back to a previous-generation model to bring Lion Internet Recovery to the 13-inch MacBook Pro that was offered from April 2010 through February 2011.

Update: Users are also reporting that similar EFI firmware updates are available for the Mid-2010 white MacBook and the Mid-2010 Mac mini.

Isn't this effectively free Lion for anyone who bought a Mac since mid-2010?


Probably not. I'm sure it requires Lion.

Does anyone know if this update removes the ability to install Snow Leopard?

N10248
Does anyone know if this update removes the ability to install Snow Leopard?
Score: 2 Votes (Like | Disagree)

It's rare that they do something like this except for a security flaw. But of course I'm very happy that they are doing this. They probably won't go back that farther, but it's a wonderful feature to have if you have a compatible Mac. I'm all for Apple doing this more often. Especially because they seldom care about previously released hardware when new software comes around.

I agree. We pay a lot of money for their products, so seeing them supporting older machines is great, and will make me consider buying more of their new products in the future.
Score: 2 Votes (Like | Disagree)

It's rare that they do something like this except for a security flaw. But of course I'm very happy that they are doing this. They probably won't go back that farther, but it's a wonderful feature to have if you have a compatible Mac. I'm all for Apple doing this more often. Especially because they seldom care about previously released hardware when new software comes around.
Score: 2 Votes (Like | Disagree)

marcusj0015
So... They're slowly bringing Internet Recovery to all supported Macs?
Score: 2 Votes (Like | Disagree)

gstevie
And on 2010 Mac Mini.
Score: 2 Votes (Like | Disagree)
Read All Comments