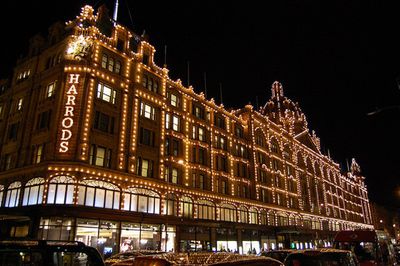 Apple is planning to open a new store-within-a-store concept at the legendary Harrods department store on Brompton Road in London, according to 9to5Mac.

Harrods boasts more than 1 million square feet of selling space across 330 departments -- plenty of room for an Apple Store of sorts. The store-in-store concept will feature wooden tables and signage but won't have the signature feature of any standalone Apple Store: the Genius bar.

9to5Mac claims the store will be smaller than the typical standalone Apple Store, but will be larger than the standard store-within-a-store at Best Buy or the new pilot program at Target stores in the US.

The richly detailed interior of Harrods
Harrods is perhaps the best-known department store in the world and is visited by more than 300,000 customers on its busiest days. The store is owned by Qatar Holdings, the nation of Qatar's sovereign wealth fund; it was sold by Mohamad Al-Fayed for £1.5 billion in 2010.

The US has absolutely the best customer service of any country I've ever been to. This is coming from a dual uk/Canadian citizen. I've been to almost 20 countries and lived in 4 and hospitality in the US is something locals take for granted. In many countries tou dont even get a "hello" or "how's it going" when you walk in the store oe "have a nice day" when you leave, nevermind a pleasent conversation with the staff. Finland comes a close second for friendliness. I really hope that Apple is using this as something that goes with their brand.


That's the Canadian in you speaking. No true cynical, grumpy Brit would allow somebody to ask "How's it going?" without pointing out the gross grammatical error contained therein. Nor would they allow anybody working in somewhere like Harrods to say the words "Have a nice day" without questioning the sincerity behind the wishing of good will while also having to subvert the image of some acne-ridden American teenager in a paper hat serving fries.

I personally prefer the "don't speak until spoken to" dynamic of Customer Service that exists in the UK and actively abhor the recent "Americanization" of many shop's policies when it comes to engaging customers. If I need help, I'm perfectly capable of asking for it. I certainly don't need some member of a clone army being falsely amicable to me because he's been told to (or because of a commission).

I can actually say truthfully that I have LEFT shops because of over-zealous staff and taken my business elsewhere, and I have certainly bought items online solely to avoid Shopping "Malls" with their American ideals of "Customer Service".

I know I'm not alone, and I'm acutely aware that it's a quirk of British culture. Just understand that although we might sometimes speak what sounds like the same language, there are cultural divides that often won't make sense after translation. British people broadly distrust nice people, especially strangers. I don't 100% understand why we're so cynical, but I suspect it might be because we live in a country where it's cold and it rains 300+ days of the year. The fact is, we can't really comprehend why a shop assistant would be so happy and 'helpful' when he works for a relatively low wage in a tertiary services industry having to serve annoying people like us. Your idea of "Customer Service" is therefore met with awkwardness, suspicion and disdain.

No doubt this proposed Apple Store will be staffed by Apple Staff in their casual dress and "American" attitude to Sales. A far cry from the "suited & booted" professionals in other Harrods Departments. And that is why the savvy, discerning Londoner will do his shopping for Apple Products online and leave the tourists to fight over the shiny iPads on display...
Score: 4 Votes (Like | Disagree)

vrDrew
Over the course of a generation Harrods has gone from being the retailer of choice for upper-middle class home-counties Brits to a vulgar, garish and over-priced trap for affluent (and largely clueless) tourists. Former owner Muhammed al-Fayed's symbolic "burning" of the Royal Warrants back in 2000 (he believed that the British Royal Family was responsible for killing his son Dodi) symbolized many things, but it merely served as a reminder to most people who actually live in London how irrelevant both those institutions had become.

Apple obviously feels it has not yet approached the saturation point in its retail footprint, and maybe there are some Harrods customers who'll feel better picking up their iPads and MacBook Airs far from the maddening crowds at Regent Street or Covent Garden. I wish them well, but I certainly won't be tempted to fight the crowds at Knightsbridge Tube Station just to check it out. Last time I was in Harrods (about ten years ago) I was more than a little amused to note that they'd instituted a £1 fee to use the toilets.
Score: 4 Votes (Like | Disagree)

flynndean
It's actually probably a cultural thing. Broadly speaking, a British Shopper will avoid talking to staff unless absolutely necessary, and even then...it's usually out of sheer desperation. We actually get equally, if not more annoyed by the US attitude to Customer Service. It comes across as false & contrite to our delicate egos.

I'm sure the staff in Harrods would have been perfectly civil & helpful to you if you'd asked for their assistance. They just adhere to the old maxim of "Less is More" so don't be expecting them to invade your day like they would on your side of the pond. It's just not very "British" (don't ask me to explain the rationale behind it...I don't know why we're so adverse to outside help).

I frequently visit the US for work & if I have to do any shopping...I have to constantly suppress the urge to punch anybody who speaks to me as part of their idea of "Customer Service" in the face...

Store within a store and no inception jokes?

Other memes are available™ 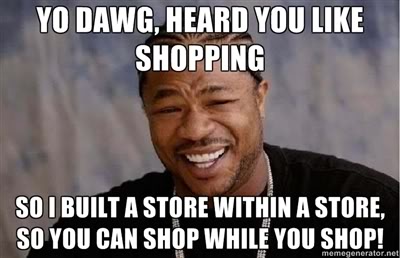 I frequently visit the US for work & if I have to do any shopping...I have to constantly suppress the urge to punch anybody who speaks to me as part of their idea of "Customer Service" in the face...


So true.
Score: 2 Votes (Like | Disagree)
Read All Comments