Reuters reports that Target has confirmed its plans to launch "store-within-a-store" concepts for Apple products in 25 of its stores around the United States. The announcement comes alongside a broader effort called "the Shops at Target" that will offer special focuses on certain products and brands.

Target Corp (TGT.N), known to many U.S. shoppers as the place to go for trendy, low-priced merchandise, will soon have shops within its discount stores selling everything from dog treats to high-end home accessories.

Target also confirmed during a presentation on Thursday that it will have 25 stores featuring special displays of Apple Inc (AAPL.O) merchandise, a move that had been speculated about last week.

Word of Target's plans first surfaced late last week, with Apple and Target reportedly teaming up to place the locations in areas without sufficient customer base to support full Apple retail stores.

Neither Apple nor Target has provided details on just what the store-within-a-store concepts will entail, although some are looking to perhaps a scaled-down version of the "Apple Shop" model used in many Best Buy stores as a possibility.

Any time I've gone in to an Apple store, it's been more than a frustrating experience to get any help from their employees. Not to mention the store is jam packed with customers "playing" rather than buying anything. Great idea and concept, but horrible in practice.

I avoid the Apple store at all costs.
Score: 6 Votes (Like | Disagree)

sk1wbw
Hopefully they will have authentic Apple employees and not Target employees running the place. You'll remember what ChumpUSA did to the Apple stuff there...
Score: 5 Votes (Like | Disagree)

Roessnakhan
As long as they have a trained staff, I'll be fine with it. Consolidating the places I frequent is a good thing, too.
Score: 4 Votes (Like | Disagree)

Good luck trying to get your average Target customer to drop $2000 on a MBP!


Just because someone shops at Target or Wal-Mart doesn't mean they don't have a decent amount of money to spend. People buy $600 Dyson vacuums at Target like it is nothing.

The average Target customer may not have ever thought about buying a $2,000 MBP there, but that is because there hasn't been a sexy display that they have to walk past every day to go buy bananas. Increasing reach and visibility is entirely the point of this initiative.
Score: 3 Votes (Like | Disagree)

lycracatsuit
Map of Apple stores in the USA

I hope a few of those stores make it to the big hole around Montana.

Praying for one of them to be in Rapid City, SD! 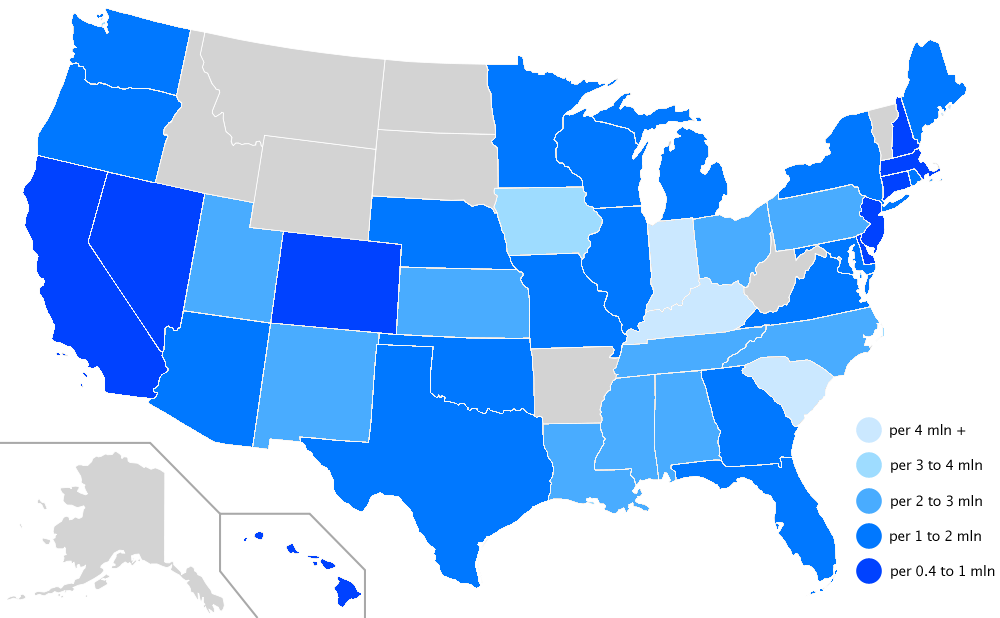 The dark blue indicates more stores, lightest blue the least, and grey none.

The map might be a little old (Little Rock, AR and Spokane, WA and a few other places now have Apple Stores)

This is the most-up-to-date map I can find of current Apple Stores:
http://www.ifoapplestore.com/stores/store_map.html
Score: 3 Votes (Like | Disagree)

I never have understood this kind of logic."I just don't like Apple being represented by Target." I doubt very much having Apple products at Target will cause one (well, maybe one) Apple customer to change their mind about buying an Apple product. This attitude has always, at least to me, reeked of some sort of "I'm a special buyer/person that would never shop at a place like this."
I don't frequent Target but certainly wouldn't deny it for areas who don't have the demographics for an Apple Store or authorized reseller. It's also obvious Apple Marketing doesn't either.
The post indicates the location for this poster is SoCal in which there are at least a dozen official stores, or more, so I don't see the relevance.

Some people are scared that their sacred social status will be ripped away once Apple products become more and more mainstream. Hilarious.
Score: 2 Votes (Like | Disagree)
Read All Comments