Research firm Gartner today released its preliminary personal computer shipment data for the fourth quarter of 2011, offering up a picture of market performance during the quarter. With year-over-year unit growth of over 20%, Apple was the only one of the top five U.S. vendors to see an increase in shipments in an overall market that shrank by nearly 6%. 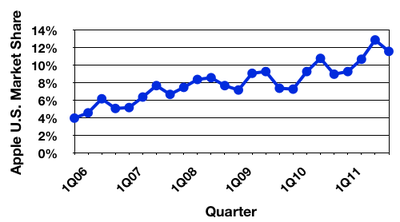 Apple's U.S. Market Share Trend: 1Q06-4Q11 (Gartner)
Apple's share dipped from 12.9% in the third quarter, which is routinely the company's strongest quarter due to a heavy presence in education. But the performance marks a distinct improvement over Apple's 9.0% share in the year-ago quarter and continues a long-term trend of increasing market share.

Gartner's Preliminary U.S. PC Vendor Unit Shipment Estimates for 4Q11 (Thousands of Units)
As usual, Gartner did not cover Apple's worldwide market share for the quarter, as the company does not rank among the top five vendors on a worldwide basis. PC shipments shrank 1.4% year-over-year on a worldwide basis, with strong growth from Lenovo and Asus being offset by declines from HP and Acer.

Update: IDC has also released its numbers for the fourth quarter of 2011, yielding results similar to Gartner's. As is typical, IDC pegged Apple's market share slightly lower than in Gartner's data, with IDC showing Apple with 10.92% of the U.S. market on 18% year-over-year growth.

MacNewsFix
With year-over-year unit growth of over 20%, Apple was the only one of the top five U.S. vendors to see an increase in shipments in an overall market that shrank by nearly 6%. 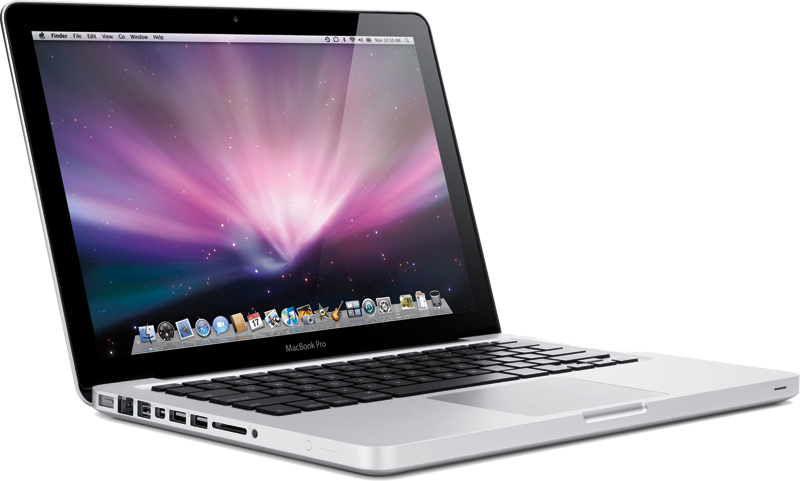 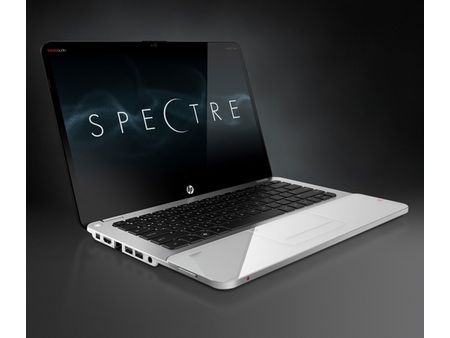 Just because it has a black border around the screen and black keys doesn't make it an exact copy...


Oh sure, the Macbook Pro had no influence on this design. :rolleyes:
Score: 14 Votes (Like | Disagree)

Im not surprised its going backwards.

The price of the Macbook pro is beyond a joke now.

having owned 2 15" pros im seriously thinking of moving away as upgrading is way to expensive.

When a laptop costs over £2000 with a half assed GPU inside and upgrades which have to be bought with blood diamonds your market share is going to drop.

Time apple started charging average prices for average spec laptops or actually spec them up to what they are trying to charge.


Goes to show that some people only see what supports their own opinion. :)

Apple is the only one of the top 5 vendors to NOT be going backwards year over year.
Score: 11 Votes (Like | Disagree)

Just because it has a black border around the screen and black keys doesn't make it an exact copy...

Edit: Wow at all the people who disliked this post and think Apple was the first with that design...

Honestly, because they try to make it as close as possible with out getting slammed with some lawsuit.

I will say this again and again, every company copies ideas from one another. Humans do it do other humans and it's pretty clear that's the way things have been and the way things are.

Apple has stolen ideas (Android notifications for one) and I do acknowledge that. But I don't believe they do it as much or as direct (physical designs) as companies are doing it to Apple today.

Companies usually try to mimic Apple's design (both software and hardware) but often just usually make a worse product. When apple does steal an idea (usually never design) they tend to polish and perfect the idea that the original company "never" could have done.

Is Apple the only company that innovates or comes up with original ideas that consumers like? Of course not! However, there is trend gaining momentum that seems to be the moto, "let Apple do most of the innovation and we'll pick off that."

Begin the downranking or bashing of this fanboy, which I'm not, but it is so blaten these days, I can't believe people try to even deny it.
Score: 10 Votes (Like | Disagree)

It probably did. But it doesn't look exactly like a MBP. Similar, yes. But not exactly.


You're right, they need to slap on the MacBook/Apple logo and THEN it'll look exactly like a MBP.
Score: 9 Votes (Like | Disagree)

The impressive part is the growth (or decline) column. It is humorous, all the buzz going to the "ultra-portable" laptops this year, as if it were something new.


While the ultra-portables want to kick Apple's MBA to the curb (kerb, in some other English-speaking countries), the analysts think they will only make about a 10% inroad, combined. Why, you might ask? They will cost as much as the MBA or up to 40% more. Some will be thinner than the MBA, but since that's the standard, you also can't charge more. If Apple refreshes the MBA early in this year, as expected, they could blow the wannabes out of the water with something like a retina display, or adding Siri, or some other compelling "next big thing." ...OR a combination of those things.

I'm tickled to see that it's still Apple's ball game and the wannabes are still in a catch-up mode.
Score: 9 Votes (Like | Disagree)
Read All Comments