VR-Zone reports that Intel is quietly working on developing a standard docking format for their upcoming Ultrabook platform. The new docking system would incorporate a Thunderbolt connector as well as what appears to be a proprietary connector as well. 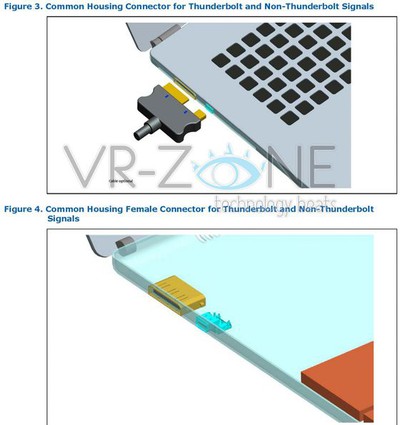 The non-Thunderbolt port would reportedly be used for power as well as direct access for the Ethernet controller which is required to support technologies such as Intel vPro and Microsoft's Connected Standby.

Apple's own solution has been much simpler. Their Thunderbolt Cinema Display offers a single cable which splits into a Thunderbolt cable and a Magsafe power cable. The Thunderbolt cable carries USB 2.0, FireWire 800, Ethernet, and Video from your laptop to the monitor.

Unfortunately, that separate non-Thunderbolt docking connector in Intel's proposal would likely prevent it from being directly supported on the Mac. Still, any major adoption of Thunderbolt technology can only help industry acceptance and the proliferation of more accessories. Belkin has already announced their own Thunderbolt docking solution which works much like Apple's display.

Intel is aggressively pushing forward the concept of the Ultrabook which bears a close resemblance to Apple's MacBook Air. Ultrabooks are expected to be the hot product at the Consumer Electronics Show (CES) 2012 which takes place in January.

They did it because like everything in the PC world, they are too lazy to get it right. They take the easy way out of everything and leave their customers with mediocrity.


Exactly, skimp out on quality just to get the product on the market faster.

Apple would probably sue them if they did something similar.


But apple is licensing Thunderbolt from Intel. They cannot sue the people they license the tech from. :)
Score: 15 Votes (Like | Disagree)

divinox
Question, why is having two separate plugs "simpler" than having but one? Common logic would state the contrary.

That said, Apples solution is certainly simple enough. I just don't get what you're going after here.

Big bulky cables like that are not the way to go. Apple proved that.


And yet every single Apple adaptor (more or less) is just that: big and bulky (comparatively). Which way is it? You can't have both.
Score: 10 Votes (Like | Disagree)

adcx64
Big bulky cables like that are not the way to go. Apple proved that with the Thunderbolt connector on today's Macs. Having two cables there is not smart, why they did not consolidate into one cable makes no sense.
Score: 8 Votes (Like | Disagree)

Big bulky cables like that are not the way to go. Apple proved that with the Thunderbolt connector on today's Macs. Having two cables there is not smart, why they did not consolidate into one cable makes no sense.


Thunderbolt is currently limited to 20W in its current implementation. This could simply be an issue of delivering more power. You won't be daisy chaining 7 devices or whatever it was off 20W. Also plenty of Apple cables are bulky and have plenty of limitations.

Apple would probably sue them if they did something similar.


You know that Intel owns it right? Are they going to sue Intel too? Intel did the primary development going back several years. Apple just got to implement it first.

They did it because like everything in the PC world, they are too lazy to get it right. They take the easy way out of everything and leave their customers with mediocrity.


Apple didn't invent thunderbolt. Say that to yourself 10 times in the mirror so that the denial can go away. Intel designed it for computers that run off Intel chipsets. They debuted/beta tested on Macs. Thunderbolt was destined for Windows PCs before Apple even had it. Recall the name lightpeak? It's the same thing. It was simply rebranded as thunderbolt. There's an incredibly uneducated biased view that Apple is the only company that knows how to do anything right. I use Macs too. I've worked on Windows computers as well, and late XP to Vista was the time they really sucked. Today they're just as good.
Score: 7 Votes (Like | Disagree)

OrangeSVTguy
Why are we still using cables? Why not try to come up with some super-high-speed close range wireless connector?
Score: 7 Votes (Like | Disagree)

Cicatrix
It will be nice to finally have a docking station for all peripherals through t-bolt. I wish it would include sata, and usb3 though. Also, that Belkin Express Dock design looks like complete junk.
Score: 7 Votes (Like | Disagree)
Read All Comments