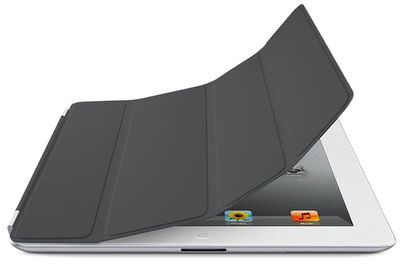 - Interior color now matches exterior color. The interior side of the Smart Cover facing the iPad screen had previously been a uniform gray color on all models with the exception of the (PRODUCT) RED version. All Smart Covers are now a consistent color inside and out.

Smart Cover showing tan color on outside and inside
- More vibrant colors for polyurethane covers. Aside from the replacement of the orange cover with a dark gray one, sources indicate that the colors on the polyurethane models are now more vibrant. Polyurethane Smart Covers come in blue, green, pink, light gray, and dark gray.

- Color adjustment on navy leather cover. Apple offer five different leather Smart Covers, and sources reports that Apple has slightly tweaked the color on the navy version to make it "more navy" than the original version. All other colors (tan, black, cream, and red) remain unchanged.

Pricing on the Smart Covers remains the same, with polyurethane covers coming in at $39.00 and leather covers priced at $69.00. While Apple's store pages have been updated with the new colors, the company's Smart Cover page does not yet reflect the changes.

Nooooooo why did they get rid of the orange!? I mean I have an orange one already but I would like to be able to buy a new one if something were to happen to this one. :(


Wow, you must be devastated.
Score: 6 Votes (Like | Disagree)

Dhelsdon
I don't understand why they got rid or Orange, of course it's not everyone's favourite.. but come on the bright colours are great!

I bought an Orange smart cover just before they were phased out.
Score: 4 Votes (Like | Disagree)

Someone at my local Apple Store must have discovered time travel, because my red Smart Cover has always had the same color on the inside and out.

hmm might have helped to have read the bit in the article that mentions that!
Score: 4 Votes (Like | Disagree)
Read All Comments