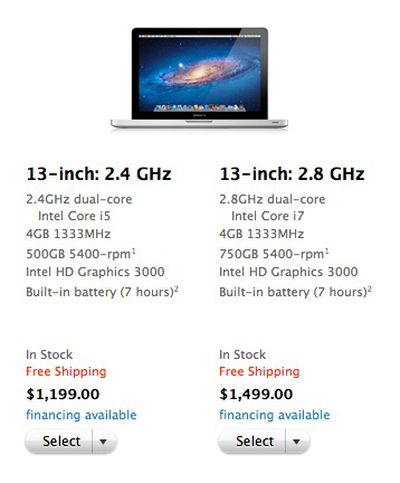 Apple today quietly released a minor update to its MacBook Pro line, offering upgraded processor, and in some cases graphics and/or storage options at the same price points as the previous models. Portions of the improved specs had been leaked to 9to5Mac by reliable source Mr. X late yesterday.

Among the key changes:

- Processor speeds have been bumped from a base 2.2 GHz Intel Core i7 with a 2.3 GHz upgrade option to a 2.4 GHz base processor with a 2.5 GHz option.

ikir
Wow they changed also the gfx card, not bad for a minor update/speed bump!
Score: 23 Votes (Like | Disagree)

bigjobby
This is a lot more than last year's mid-cycle bump up. Not sure what some people were expecting but Apple were never going to do anything radical.
Score: 12 Votes (Like | Disagree)

Come on, Apple! We need 8GB RAM as standard configuration!


I'd wager most users don't.
Score: 11 Votes (Like | Disagree)
Read All Comments