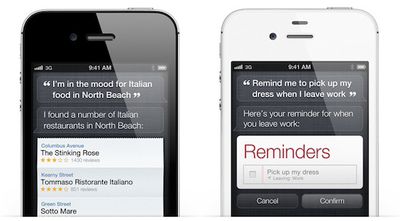 As one of the main features of the iPhone 4S, Apple today introduced Siri a personal assistant that can
answer questions and perform for tasks for users based on voice input.

Siri on iPhone 4S lets you use your voice to send messages, schedule meetings, place phone calls, and more. Ask Siri to do things just by talking the way you talk. Siri understands what you say, knows what you mean, and even talks back. Siri is so easy to use and does so much, you’ll keep finding more and more ways to use it.


Apple covers a number of examples of Siri's flexibility on the feature page and describes them in its iPhone 4S press release:

Siri understands context allowing you to speak naturally when you ask it questions, for example, if you ask “Will I need an umbrella this weekend?” it understands you are looking for a weather forecast. Siri is also smart about using the personal information you allow it to access, for example, if you tell Siri “Remind me to call Mom when I get home” it can find “Mom” in your address book, or ask Siri “What’s the traffic like around here?” and it can figure out where “here” is based on your current location. Siri helps you make calls, send text messages or email, schedule meetings and reminders, make notes, search the Internet, find local businesses, get directions and more. You can also get answers, find facts and even perform complex calculations just by asking.

Siri is launching as a beta with support for English (US, UK, and Australia), French, and German. Additional languages and features will be added in the future.

Agree, this was very disappointing..


How? How on Earth was any of this disappointing? The rumour mill comes up with the most impossible products every year, and every year what you dream of never happens. Every single year! My God, if you haven't learned by now there is no hope for you.
Score: 36 Votes (Like | Disagree)

This is siriously underwhelming. They didn't even bother renaming it! What have they been doing all those months? The stock is plummeting and all I can say is: well deserved.


Well, this about sums it up correctly. If an Apple nerd hates it, it'll be a hit in the market.

People around here hated the iPod, hated the iPad and just about every other product Apple releases.
Score: 18 Votes (Like | Disagree)

jamesr19
this looks really good, shame it seems to be limited to the iPhone 4S hardware!!
Score: 16 Votes (Like | Disagree)

No surprises this time...
...16 months wait for an antenna that works, no redesign & a crap gimmick you can only use when it's silent around you...
Goodbye crapple...i'm pretty disgusted & feeling let down, but not surprised at all...
Fanboys are so loyal and apple just p*ss on them every time because they know they can...


Your sense of entitlement is refreshing! I know Apple owed it to you to provide you with exactly what you imagined! I cannot believe they screwed you like this!

Dude, go get some fresh air. You may find it, um, refreshing.
Score: 14 Votes (Like | Disagree)

jmgregory1
Yes, start by taking a hammer to any and all Apple hardware you now own - they purposely let everyone down by not introducing a new design iPhone with a bigger screen and super duper faster processor and 4G speed and and and.

Very odd that people have such strange expectations - if you want a bigger screen, either buy an android phone or try to get a job at Apple as a industrial designer or product manager and make the suggestion for a bigger screen.

I'm pretty sure Apple has looked at just about every aspect of every possible spec for a smart phone. They chose what they chose for reasons they don't necessarily need to explain to you or anyone for that matter.

You don't know and don't think big picture (not big screen) the way that Apple does. If all you care about is specs, please go get yourself any other manufacturers phone and enjoy you got the spec you wanted.

And for those people who say voice control is available already - it's not in the same integrated way just introduced by Apple.
Score: 14 Votes (Like | Disagree)

campingsk8er
I honestly don't know why all you crybabies are complaining. The made an excellent phone even more excellent. Or are you just upset that Steve Jobs didn't announce it, or the fact that there wasn't one more thing. I'm glad there wasn't one more thing because then you would all say, Tim is a copy cat. It seems apple can never please any of you. Well I was pleased
Score: 13 Votes (Like | Disagree)
Read All Comments