With the new 27" Apple Thunderbolt Display now shipping to customers, Apple has posted a new support document outlining what can and can not be accomplished with multiple monitors on Thunderbolt-enabled Mac systems. 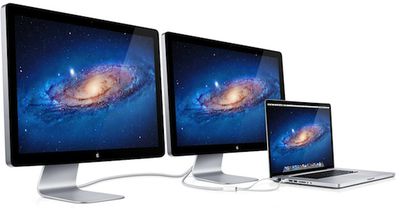 As far as compatibility, Apple notes that all Thunderbolt-enabled systems with the exception of the MacBook Air can handle two Thunderbolt displays, with a caveat for the 13-inch MacBook Pro being that the computer's internal display will not function if two Thunderbolt displays are connected. The high-end $799 Mac mini with discrete AMD graphics is also capable of running a third display via HDMI.

One other note of interest that will be a disappointment for some users is the disclosure that users will not be able to daisy chain a Mini DisplayPort display off an Apple Thunderbolt Display.

Mini DisplayPort displays will not light up if connected to the Thunderbolt port on an Apple Thunderbolt Display (27-inch).

It is unclear why simply inserting another Thunderbolt device into the middle of the chain allows the Mini DisplayPort display to function, but at least one MacRumors forum member has confirmed that he is unable to daisy chain his Mini DisplayPort-enabled Apple Cinema Display directly off of the new Thunderbolt display.

AAPLaday
Would have been nice if this information had been divulged on day one.
Score: 9 Votes (Like | Disagree)

zorinlynx
Wow, this sounds so half-assed. You'd think Apple would be able to get something like this right!
Score: 9 Votes (Like | Disagree)

Adding my existing 24" IPS monitor as a daisy-chain from my as-of-yet-unordered t-bolt display was my grand scheme. So now its off.


This limitation is very head scratchy...
Score: 9 Votes (Like | Disagree)

iVoid
Wow... so other thunderbolt devices allow MDP to be used at the end of the chain, but not Apple's own display?

Forcing the TB displays to be the first in line makes me think something's not quite right.
Score: 9 Votes (Like | Disagree)

Apple's hedging it's bets in case 3rd party makers skimp on quality parts. It's smart to have the largest power drawing item first...in any situation.
I'm guessing the screen could flicker.

But the display has its own power connection cable. I doubt it'd be possible to power an entire 27" display through Thunderbolt.
Score: 8 Votes (Like | Disagree)
Read All Comments