One area that Apple has been heavily investing in over the past few years has been in mapping technology and resources. We'd heard a few years ago that Apple was actively recruiting mapping specialists, and the public signs have been considerable since then.

In 2009 and 2010, Apple acquired two mapping companies Placebase and Poly 9. Apple has also been actively recruiting for their "Geo Team" to take their Maps app "to the next level". We've even found evidence that iOS 5 might already have some of the underpinnings to Apple's own mapping solution.

Last week, we saw the first patent application filed by Placebase founder's Jaron Waldman after he began work at Apple. This week, we have found another that's even more interesting.

Jaron Waldman is credited as the inventor for this Apple-assigned patent application which details the use of augmented reality in assisting with directions and finding points of interest. 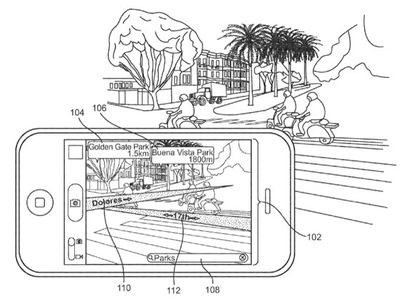 This concept isn't new, of course, and we've seen a number of Augmented Reality applications appear in the App Store. The basic concept revolves around taking live video using your iPhone and then overlaying relevant information, such as points of interest.

Apple's implementation focuses on searching for a landmark and then getting directions. Here's an example of an existing iPhone app the tries to do similar:

Apple files many patent applications each week which means that most never make it into products. Apple's mapping interest, however, has been particularly well known, and we feel there may be a lot coming from Apple in this realm in the near future.

Not exactly a ringing endorsement of Augmented Reality, since the Rockefeller Center subway station is nowhere near the scene in that screenshot (Times Square). :-)

:cool:
The app is suggesting to walk one block east to Sixth Avenue and another five to eight blocks north to the Rockefeller Center subway station. With this app to guide your steps.
Score: 3 Votes (Like | Disagree)

legacy fan
I'd prefer pre-loaded maps (not having to rely on google and your data connection) with features such as Augmented Reality & turn by turn Nav available as add-ons/in-app purchases and work a deal with garmin etc so you're not stepping on their toes (not all of them anyway).


If every hyperlinked address/location opens the native maps app by default, then it would make more sense & be more fluid and streamlined to continue my Nav or points of interest experience in that app instead of C&P to open up Navigon/Garmin or any other.

This is really the only feature of iOS IMO where the "keep it simple Apple experience" is more like a Windows headache.
Score: 2 Votes (Like | Disagree)

8CoreWhore
Man, Apple likes to take their sweet time in releasing stuff (and getting it right), but I really, really, want them to get this out soon. :)
Score: 2 Votes (Like | Disagree)

japanime
I would love to see a native maps app with augmented reality features built into iOS, particularly if those maps aren't just limited to North America. Google maps are OK, but I don't feel they cover Japan all that well.
Score: 2 Votes (Like | Disagree)

InuNacho
What, no aliens to shoot at!?
Score: 1 Votes (Like | Disagree)

Mr. Gates
It looks cool as it did with the many other Apps that have already done this.

But I'd be weary of granting Apple a patent nowadays. They don't play well with the other kids.
Score: 1 Votes (Like | Disagree)
Read All Comments