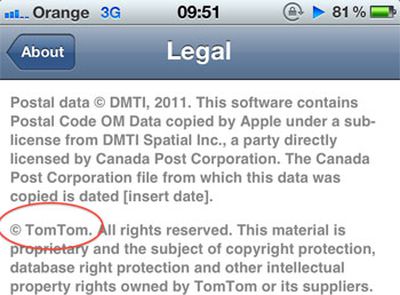 Despite statements by Google's former CEO that Apple had "just" renewed their Map partnership with Google, there appears to be evidence that Apple has been working on its own mapping solution in iOS 5.

It's certainly no secret that Apple is actively working on some sort of mapping solution. In the past few years, Apple has acquired two mapping companies Placebase and Poly9. The company has also been actively recruiting for job applicants with navigation software experience and has even revealed work on a future crowds-sourced traffic database.

This entire section is new in iOS 5's legal section and does not appear to be related to Google's own mapping data licenses. Google's own legal terms for their map data is distinct, and many of the companies do not overlap. In fact, one of the listed traffic-data companies is a competitor to Google's Maps.

The companies listed in iOS 5's legal notices include the following diverse companies under the "Map Data" section:

The last two companies are perhaps the most interesting. Urban Mapping offers extensive additional data over traditional mapping products. The company was even a partner of Placebase's back in 2007 before Apple's acquisition. Meanwhile, Waze seems to be exactly what Apple was talking about when they hinted at crowd-sourced traffic data. Waze offers mobile apps that can be used to send data back to a central database to show realtime traffic data.

Given the news of Apple's recent agreement with Google, it may be that Apple's own solution wasn't ready for iOS 5, so we may have to wait a while before we see what Apple's been working on.

With the remaining problem that you cannot (literally cannot - it is impossible) create as comprehensive a business location database as Google maps has unless you own the world's most important search engine as well to encourage busineses to submit up to date listings.

I don't believe that. You're suggesting that Google Maps gets all its data from user submissions? Link?

According to Google (http://www.google.com/intl/en_us/help/legalnotices_maps.html) they get at least some of their business listings from Acxiom Corporation and/or infoUSA Inc.

Google Maps is fantastic. The app itself on iToys could be improved, but why go to the effort of making a whole new map format and collect data when Google has it all already?!

Invention for the sake of invention is pointless, at least commercially. Google have an excellent database, there is so much data at their hands.


Call me Mr Paranoid, but I don't trust Google, with their vested interests across a range of industries now, with the only copy of such a database. It's too easy for them to decide to manipulate its data for their own ends if it were to suit them in the future.

It's good that competitors like Apple and Microsoft should come up with their own such systems to ensure no one dominates and that what constitutes the 'truth' is not the domain of one organisation.
Score: 5 Votes (Like | Disagree)

Maybe it's just because Google Maps also use third party companies providing mapping data where Google Cars didn't go. And Apple had to mention them ?


If you read the article, it says that Google uses different sources for some of the same data. Also, one of the companies listed is a competitor to Google Maps local traffic feature.

Google Maps is fantastic. The app itself on iToys could be improved, but why go to the effort of making a whole new map format and collect data when Google has it all already?!


Apple probably feels that it's not a good idea to depend so deeply on a direct competitor for such an important data source. Although I don't think Google would actually do anything malicious to sabotage Apple's maps, it seems like they have been holding back some of the goodies for themselves - the 3D maps in Android, for example.
Score: 4 Votes (Like | Disagree)

Biolizard
We've seen this before. Internet Explorer for Mac led to Safari.
Score: 4 Votes (Like | Disagree)
Read All Comments