Teardown and repair firm iFixit is well underway on a teardown of the new 13-inch MacBook Air, and while most of the computer's internals are nearly identical to that of its predecessor, a few items of note have been discovered. 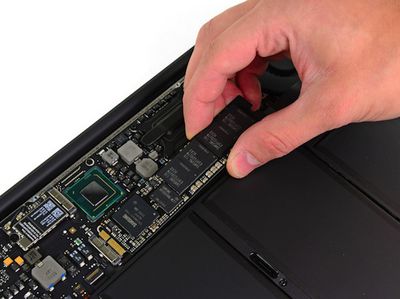 - Apple is continuing to use a modular design for the MacBook Air's solid-state storage, meaning that it can be replaced or upgraded if necessary, although it is not officially supported as a user-replaceable component by Apple. A report in the weeks leading up to the machine's debut had claimed that Apple might be shifting to new Toggle DDR 2.0 flash memory, which would be soldered directly onto the motherboard. This is not the case, however, with Apple continuing to use a separate, pluggable board for the solid-state drive.

- The teardown of course also reveals the new keyboard backlight cable for evenly illuminating the computer's keyboard in dark conditions. The system includes several fiber optic channels to ensure that the illumination is distributed evenly.

iFixit will be looking further into other changes such as the Thunderbolt connectivity to learn what else is behind the updated machine's capabilities.

We'll update this post with any additional information of note as the teardown continues.

Good! A soldered-on SSD would be a fairly bad idea at this point, considering the failure rate of SSDs in general. I'm not too crazy about soldered on RAM, either, as that's a component that fails often as well.


I have been using computers for decades now, including a 6 month stint at a shop repairing PCs (albeit 13 years ago), and I can tell you that memory does NOT fail often. In fact, I'm not sure I can recall a single instance of memory failing in any of my computers, or those of my colleagues. Memory is pretty reliable.

SSDs shouldn't fail often either, though they're still a bit new to have any meaningful longevity data. Certainly the certified r/w cycles should be plenty to ensure the typical SSD sees many years of service. Nobody I know with an SSD has suffered a single failure yet (admittedly it's a tiny sample size of about 5 drives over 3 years, starting with the original Air).

That said, I do agree a soldered on SSD would be silly. Upgradable/replaceable RAM would also be nice, but I see why Apple can't do that in this case design.
Score: 7 Votes (Like | Disagree)

Hellhammer
Like I suspected, the controller is the same as in Samsung 470. 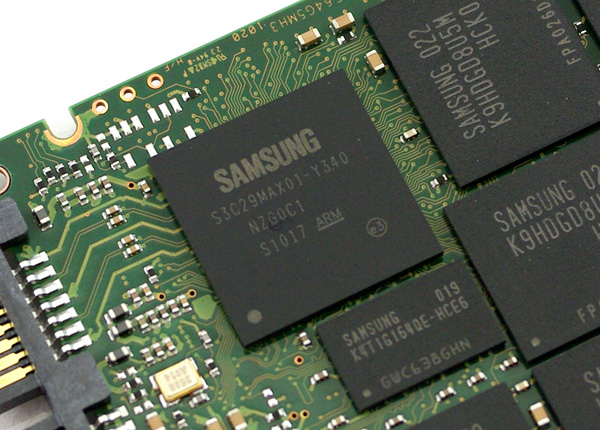 Look closely at the photo of the SSD -- it is now confirmed, it is a Samsung SSD and not a Toshiba, as was used in the 2010 MacBook Airs:

Some of the 2011 models are still shipping with Toshiba according to early buyers. It's the same controller as in Samsung 470 series like I posted above and speculated in AnandTech in April: http://www.anandtech.com/show/4275/apple-now-using-samsung-ssds-in-macbook-air
Score: 3 Votes (Like | Disagree)


reasonable for what it is..
Score: 3 Votes (Like | Disagree)

I bought a maxed out one (edit: 13 in), so I guess it's safe to assume I'm getting the Samsung since the old Toshibias didn't go to that size right?


NO, you could still have a Toshiba. A few users on this forum reported they got TS256C.
Score: 2 Votes (Like | Disagree)

What's up with all those Samsung chips on Apple motherboards?


If you are referring to the actual SSD (there are no other Samsung parts), they are NANDs. They are the chips that hold your data. Looks like four NANDs so 32GB each in 128GB model. Either 8x4GB dies (if 3Xnm) or 4x8GB dies (if 2Xnm). I would guess the latter.

This is the best news I've heard since the MBA refresh was announced! :D

That means that an SSD can be replaced after the warranty or Apple Care has expired without having to replace the entire motherboard. (Before that it's Apple's problem.)

Will the differences show in System Profiler?