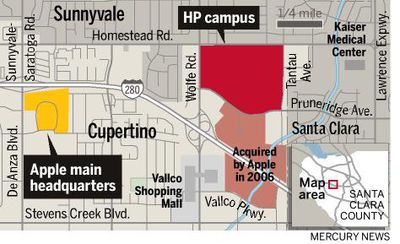 Late last month, it was revealed that Apple had purchased HP's 98-acre campus in Cupertino, California, located across the street from a 50-acre parcel Apple had purchased in 2006 and just a few blocks from its main campus on Infinite Loop. As picked up by MacStories, Spanish business newspaper El Economista is now reporting [Google translation] that acclaimed British architect Norman Foster has been selected to design the new campus.

According to the report, environmental issues are being included as a key aspect of the campus design, with all roads reportedly being placed underground to allow for a maximum amount of open green space on the campus. The design will reportedly also incorporate the latest in building materials and renewable energy capabilities.

In designing Apple's campus, Foster is reportedly drawing on his experience with Masdar City, a new sustainable community under development in Abu Dhabi designed to house up to 50,000 people in a car-free, zero-carbon environment powered entirely by renewable energy sources.

Foster, working with his firm Foster + Partners, is among the most highly-recognized architects in the world, having been awarded the premiere Pritzker Prize for architecture in 1999 and twice won Britain's Stirling Prize. Among Foster's most well-known works are the Millennium Bridge and 30 St Mary Axe ("The Gherkin") in London, Hearst Tower in New York City, and his reconstruction of the Reichstag in Berlin, including the addition of a glass dome offering a panoramic view of the city.