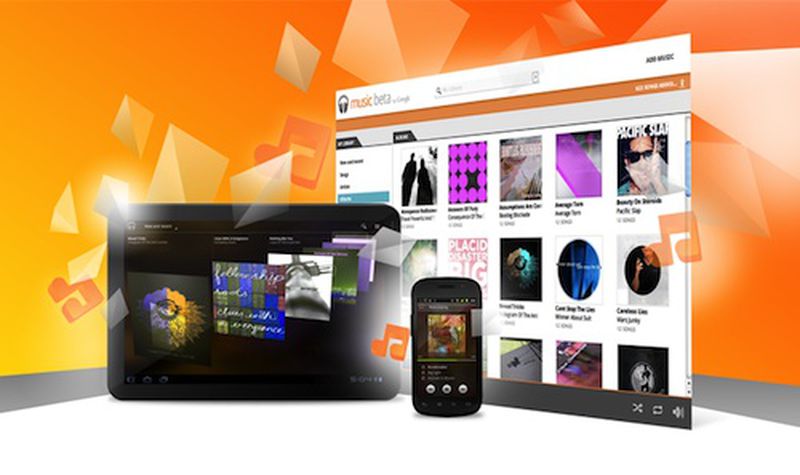 As expected, Google today announced its new Music Beta service, offering users the ability to upload their music libraries to Google's servers for cloud-based hosting that allows users to access content from any device. The offering competes against Amazon's Cloud Drive and Cloud Player services, as well as Apple's expected MobileMe revamp.

Music Beta is currently available via invitation to U.S. users and will allow users to upload up to 20,000 songs using software for Mac or Windows. The service then offers a web-based interface and initial app support for Android devices. The service is free while in beta, and Google has yet to announce pricing for when the service exits beta.

Like Amazon's cloud-based system, Google has yet to achieve the cooperation of major music labels, forcing the company to rely on a "passive" system in which users are responsible for uploading their own content. Google had been working to reach agreements with record labels to roll out a more robust service, but those talks had stalled with the two sides at an impasse. With Apple reportedly having its own service ready to go and finalizing deals with record labels, Google has apparently shifted gears to more quickly launch the scaled back service without label support.

Thataboy
My whole life I have been an early adopted, on the cutting edge of tech.

Maybe I am now an old man, because I SIMPLY FAIL to see the point in either Amazon or Google's offering.

1. Streaming all media in an age of mobile data caps? Not cute.
2. 8GB, 16GB, 32GB etc. is a ton of space to house thousands of songs locally. No network connection required. Will it hold your entire music collection? Probably not. But you don't listen to your entire music collection all the live long day.
3. If you want access to your entire collection, stream from your own computer via AudioGalaxy or whatever other programs there are out there. AudioGalaxy works very well. Yes, your computer needs to be on. Big deal.

So to recap, use local. If you want to stream, stream from your own computer, but keep in mind your data caps.

Why does a third party need access to all of my files? F that. Google and Amazon are not game changers here. People are flipping out like they're doing something impressive. Keep in mind, I actually really like Google and Amazon :)
Rating: 8 Votes

algiris
If you want it with you all the time then why don't you put it on your damn iPod?
Rating: 8 Votes

I couldn't agree more. Google went to town at this I/O. I'm really impressed with the span of their developments.

Really? Is anything that Google announced today shocking or revolutionary? So far they have announced they are trying to cure fragmentation which they announced last year and still hasnt worked. Movie rentals and clould storage is old news and they are finally catching up. So far there is nothing surprising to me.
Rating: 6 Votes

ChazUK
U.S only makes me a sad panda.
Rating: 6 Votes

you need to look at the music streaming stuff as just part of what Google are planning..their vision for mobile and home entertainment which so far is winning and winning well.

Their i/O today was certainly more impressive than anything Apple has done recently.

Assuming Google can deliver then this iOS vs Android thing is over before it even really began.


Given that Google delivered on almost nothing they promised at last year's I/O (and what they did deliver mostly flopped) I'd say this is a lot less definitive than you make it sound. Also, where Apple wins is not in getting there first, but being the first to implement it in a way that doesn't require the users to be a card-carrying member of the Geek Club. Google's music thing will require a very intuitive interface and a no-hassle approach for the end user, and that's not something Google is known for.
Rating: 5 Votes


You're comparing a cloud service to hardware? If you want to compare Apple products to Google's "Music Beta" use "Ping", "MobileMe", and "iWork.com", which should also have "Beta" attached to them.
Rating: 5 Votes

12:36PM Android Open Accessory announced! Think "Made for iPod," but by Google.

12:37PM We've got a fitness demo about to go down. And some dude just yanked his pants off and hopped on a treadmill. A strange amount of laud from the crowd.

happydude
this cloud based music service just isn't a product i really care about or want. why have to deal with connectivity issues when my iphone can hold the few thousand songs i care about anyway. so . . . i don't see myself jumping on board. prob just wait to see what apple's solution is and dive in or not at that point. i'd assume the apple ecosystem will just work better with my macbook and iphone anyway. eh, whatevs.
Rating: 5 Votes

You sir, are narrow minded and need to stop thinking for yourself. My iPhone only holds 32 gigs. I need to reserve 10 gigs of that for apps and photos, leaving me only 20 gigs or so for music. My iTunes library at home has 15,000 songs and is over 150 gigs.

Um, I think I was asking sincerely so that I could expand my narrow mind.

I thought I was missing out on some really cool use for this besides "My music library is bigger than my device storage".

This is a big technology deployment to support the case you're talking about, considering storage on devices continues to increase, outpacing the growth of most music collections.
Rating: 5 Votes

If nothing else, maybe this will finally force Apple to rewrite (or rethink) iTunes so that it stops sucking.