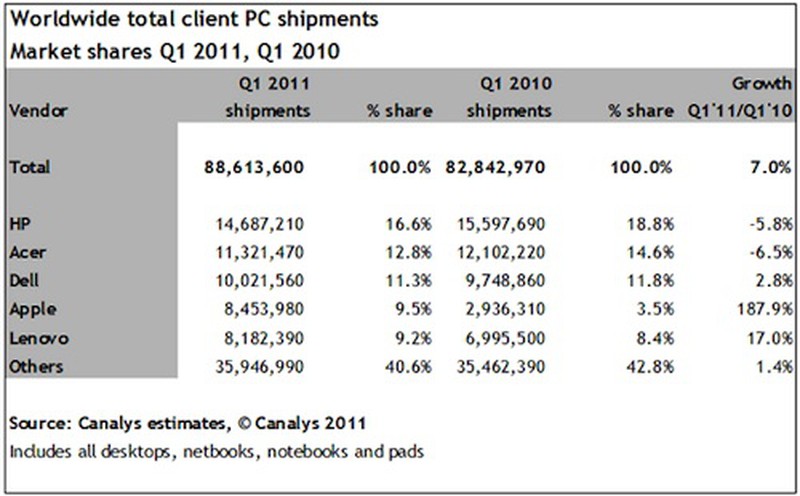 With the iPad being added to the mix, Canalys calculates Apple's year-over-year growth for the quarter at nearly 188%, but down 31% from the previous quarter.

Apple continued with its strategy to dominate the pad market, with the iPad or iPad 2 available in 59 markets by the end of Q1. A combination of strong Q4 sales and the announcement of the iPad 2's launch across major markets at the end of March contributed to Apple's iPad shipments being down 31% sequentially. The full impact of the iPad 2 launch will not register until subsequent quarters, as Apple gets the product into the hands of consumers. While pad sales continued to lift Apple's results, PC vendors with a focus on the consumer netbook and notebook market, such as Acer and Asus, did not fare so well.

Canalys reports that a total of 6.4 million "pad" devices were shipped during the quarter, with Apple accounting for 74% of the total.

iOS v Android
Make up your mind what you want to count iPads as. Damn is it a mobile device a computer. Someone give them a ****ing category already.
Score: 7 Votes (Like | Disagree)

NebulaClash
The iPod was not a fad by any sense of the word. Once you reach a decade of popularity, it's not a fad. It's like calling land line phones a fad because there was a time when they didn't exist, then they did exist and were popular, and now they are fading due to cell phones. Ridiculous.

A fad is something that comes and goes quickly with a spike in popularity at its peak, and then people look back and wonder why they did it. That isn't the case with the iPod which still sells in the millions.

Amazing to see how people will resort to anything to make Apple look less popular than they are.
Score: 6 Votes (Like | Disagree)

Well you have a point there. The iPod was a so-called fad too. It took 8 or 9 years for it to wear off and see fickle consumers switch to the next fad, the iPhone and iPad. The iPad-like devices may be a fad but it's likely to die out b/c a it's replaced by a next gen device. Apple is already showing it's cards in melding OS X with hints of iOS.

I disagree. The only reason people stopped buying the iPod was because it was more convenient to have a phone and iPod in a single device. Once people started buying iOS and Android devices, they no longer *needed* an iPod.

So the iPod didn't die down because it was a fad... it died down because technology has replaced it. The need for a PMP such as the iPod is still very much alive, just in a different form.
Score: 5 Votes (Like | Disagree)

No surprise the iPad is just a fad and people are starting to realize how limited it is. Its frustrating on a lot of cool websites and no file system makes it very limited.

They can sell as many as they can make, production is the limiting factor at the moment NOT lack of demand.
Score: 5 Votes (Like | Disagree)

Andronicus
I dont think iPads should be included. A computer shouldn't need a computer to be usable.
Score: 5 Votes (Like | Disagree)

iekozz
However the iPad is not a pc, so this report is a bit on the Apple side here.
Score: 5 Votes (Like | Disagree)
Read All Comments