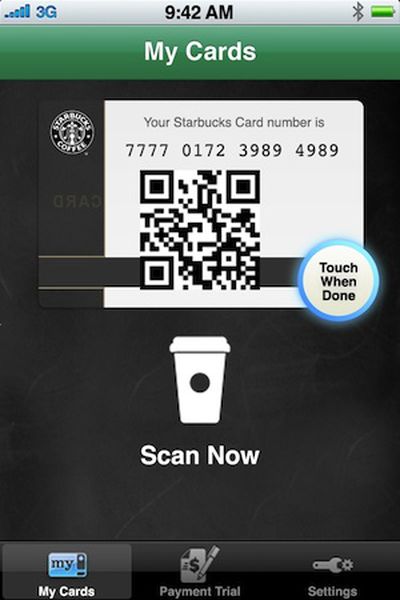 Starbucks today announced that its mobile payments solution for the iPhone, iPod touch, and select BlackBerry devices is now available nationwide, allowing customers to pay for their purchases using the company's mobile app at nearly 6,800 traditional Starbucks locations and over 1,000 Starbucks locations in Target stores across the United States.

To experience mobile payment at Starbucks, customers just need to download the free Starbucks Card Mobile App for select BlackBerry smartphones, iPhone or iPod touch mobile devices. More than one-third of U.S. Starbucks customers use smartphones, of which nearly three quarters use BlackBerry smartphone or iPhone mobile devices. In addition to the mobile payment capability, the app allows customers to manage their Starbucks Card account, check their card balance, reload their card with any major credit card (iPhone users can also use the PayPal feature), check their My Starbucks Rewards status and find a nearby Starbucks store with the store locator feature.

Customers can pay with their smartphone by holding their mobile device in front of a scanner on the countertop and scan the Starbucks Card Mobile App's on-screen barcode to make a purchase.

Starbucks began testing the mobile app payment functionality nearly a year and a half ago in a handful of stores, expanding the trial to Target-based locations in March 2010.

While the Starbucks mobile payment system relies on a scanner being able to read a QR Code displayed on the iPhone's screen, many have been waiting for Apple to embrace more advanced technologies such as near field communications (NFC) that would allow users to make purchases by simply bringing their devices into close proximity with sensors at retail points-of-sale.

Rumors of NFC- or RFID-equipped iPhones have been circulating for some time, and Apple has also filed several patent applications related to the technology while also hiring several employees known to be experts in the field. One such employee, Benjamin Vigier, joined Apple last year, bringing extensive experience in NFC and other mobile payment technologies, including having developed the current Starbucks mobile payment system while working at mFoundry.