The Beatles Appear in iTunes Store 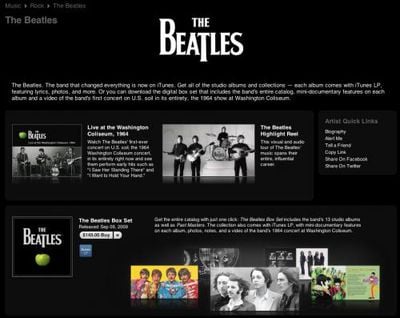 Ahead of Apple's planned announcement scheduled for about half an hour from now that has been expected to see content from The Beatles finally come to the iTunes Store, that content has already gone live. The offerings are headed by The Beatles Box Set, offering a total of 256 songs and other items, including iTunes LP mini-documentary features and a video of the band's first U.S. concert, all for $149.00.

Individual albums featuring enhanced iTunes LP content are also available, with the majority of them priced at $12.99 and a few others including "The White Album" and several greatest hits collections available for $19.99. Songs are generally also available on a per-track basis priced at $1.29 each.

Update: Apple has now updated its homepage to reflect availability of The Beatles' catalog on iTunes, and issued a press release about the release.

Apple Corps, EMI and Apple today announced that the Beatles, the most influential and beloved rock band in music history, are now available for the first time on the iTunes Store (www.itunes.com). Starting today, the group's 13 legendary remastered studio albums with iTunes LPs, the two-volume "Past Masters" compilation and the classic "Red" and "Blue" collections are available for purchase and download on iTunes worldwide as either albums or individual songs. Fans can also get a special digital "Beatles Box Set" featuring the "Live at the Washington Coliseum, 1964" concert film, a worldwide iTunes exclusive which captures the Beatles' very first US concert.

Apple has also posted a dedicated page on its site highlighting The Beatles and offering video streams of new ads promoting the release and footage of the Washington Coliseum concert.

Update 2: According to All Things Digital, Apple has exclusivity on digital distribution of The Beatles' catalog "into 2011".
[ 1928 comments ]

Of course, my favorite band is They Might Be Giants, so there's no accounting for taste. :) At least their songs are catchy, they have good instrumentals (even if some of them are electronic), they harmonize well, and their lyrics have meaning below the surface.
Score: 2 Votes (Like | Disagree)


I too was frustrated by the lack of Beatles tracks on iTunes back in 1980. :rolleyes:
Score: 1 Votes (Like | Disagree)

wow, $149 for a bunch of downloads. i'll just buy the CD set at these prices


Then you have to rip all those CDs in to iTunes...
Score: 1 Votes (Like | Disagree)

mcmacmac
Wait! Maybe they brought the two dead Beat(le)s back to life!
Score: 1 Votes (Like | Disagree)