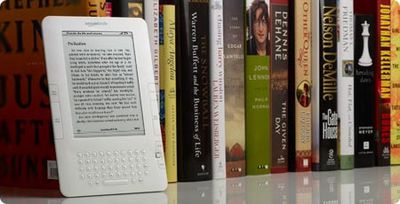 Amazon Kindle
A pair of announcements from Apple's competitors are making the rounds today, headlined by comments from Amazon CEO Jeff Bezos revealing that the Kindle will remain focused on the e-reading market for now rather than branching out into multi-purpose devices like the iPad.

"The Kindle will compete with these LCD devices like the iPad by being a very focused product," Bezos said at the meeting, which was webcast. "Serious readers are going to want a purpose-built device, because it's an important activity for them."

When pressed on when consumers might be able to expect a color Kindle, Bezos noted that competitive color displays using the E Ink technology found in the Kindle are "still some ways out", indicating the company does not plan to move to LCD display technology.

Speculation regarding Amazon's future Kindle plans has been stoked by the company's release of a software development kit to allow developers to create applications for the platform and by its recent acquisition of Touchco, a company specializing in multi-touch technology.

Dell Streak
Meanwhile, Dell today officially announced the Streak, a 5-inch mini-tablet running Google's Android operating system. A prototype of the Dell Streak was shown off at CES back in January, with the company now revealing that the device will initially launch in the United Kingdom early next month.

Dell has partnered with wireless carrier O2 to provide service for the device there, although device and data plan pricing have yet to be announced. The Streak is scheduled to come to the United States "later this summer".

The Dell Streak is a hybrid device that lives in the space between a smartphone and other larger tablets or netbooks that you might be using right now. We designed it to provide a wide range of users flexibility to do what they need with a mobile device.

With a 5-inch display carrying an 800 x 480 resolution, Dell positions the device has having a significantly better video and browsing experience than most smartphones. While the Streak may carry a physically larger display than a smartphone, those devices are increasingly coming with higher pixel densities that match or exceed the Streak, as the Motorola Droid shipped last fall with an 854 x 480 display and the next-generation iPhone's display has been rumored to offer as high as a 960 x 680 display.