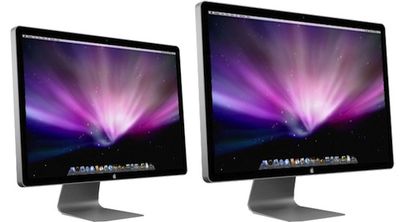 Two people familiar with the upcoming display say its been lingering in Apple's labs for quite sometime, where it's frequently referenced by the unique identifier/codename "K59." The Mac maker is believed to have been waiting patiently for the cost of the larger LCD panels, which sport a resolution of 2560 by 1440 pixels, to shed some of their premium before introducing the model to market.

As for the Mac Pro, the report's sources indicate that Apple will stick to Intel's Xeon processors, utilizing members of the 5600 series released earlier this week. While the Mac Pro is due for a refresh and recent rumors had suggested that a release might be imminent, the report similarly offers a window of "by June" for the refresh.