A discovery that Apple's promotional materials for the iPad show properly-displayed Flash content while Web browsing in contrast to the "broken plug-in" icon observed on-stage at Apple's media event has generated a great deal of interest and discussion today, with some wondering whether Apple is yet planning to incorporate Flash support into the shipping product.

This is unlikely for various reasons, as Apple is likely to follow the precedent set by the iPhone and not offer Flash support for the iPad. First, as several observers have noted, Flash content was similarly shown in promotional materials for the iPhone prior to its introduction, leading to speculation at that time that Flash would be supported. The iPhone, of course, still has not supported Flash to this point.

Second, Adobe's Flash team, which would likely be aware if Apple were planning to offer Flash on the iPad, has already reacted and is apparently resigned to the fact the Flash support will not be included on the iPad.

It looks like Apple is continuing to impose restrictions on their devices that limit both content publishers and consumers. Unlike many other ebook readers using the ePub file format, consumers will not be able to access ePub content with Apple's DRM technology on devices made by other manufacturers. And without Flash support, iPad users will not be able to access the full range of web content, including over 70% of games and 75% of video on the web.

If I want to use the iPad to connect to Disney, Hulu, Miniclip, Farmville, ESPN, Kongregate, or JibJab -- not to mention the millions of other sites on the web -- I'll be out of luck.

Finally, several readers have noticed that in many shots the URL shown in Safari on the iPad in Apple's promotional materials is actually an apple.com gallery page rather than the real New York Times page it appears to be at first glance. 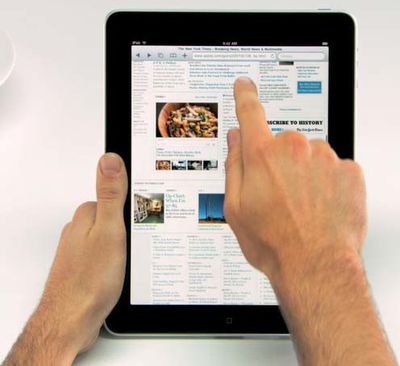 Consequently, it appears that the presence of Flash support in Apple's iPad promotional materials is either the result of video editing tricks or a specially-configured Flash-compatible iPad used for the video and image shoots.

Update: MacRumors has heard from a source that The New York Times itself generated high-resolution images of several of its pages, including Flash and ad content, in order to improve the look of the pages for Apple's use in iPad marketing materials.

Thursday September 29, 2022 12:38 pm PDT by Juli Clover
Tony Blevins, Apple's vice president of procurement, is set to depart the company after he made a crude comment about his profession in a recent TikTok video, reports Bloomberg. Blevins was in a video by TikTok creator Daniel Mac, who was doing a series on the jobs of people he spotted with expensive cars. After seeing Blevins in an expensive Mercedes-Benz SLR McLaren, Mac asked Blevins what ...
Read Full Article • 291 comments