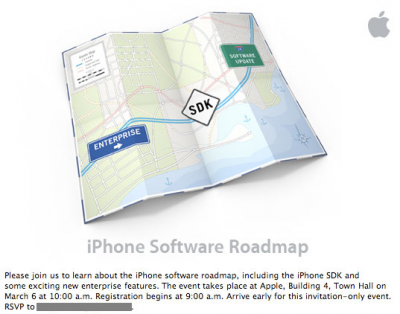 Apple is hosting a media event today to outline the iPhone Software Development Kit (SDK) and "some exciting new enterprise features". There have been a collection of rumors suggesting that Apple may not be able to deliver the final SDK immediately. That hasn't stopped a number of companies, such as reQall (memory aid), Six Apart (blogging software), and Freeverse (sports games), from announcing their intentions to write iPhone native applications with the new SDK. Meanwhile MySpace and SlingMedia have been rumored to be early recipients of the unreleased development kit.

The event kicks off today at 10am Pacific, 1pm Eastern. A running countdown is provided at the top of MacRumors.com. MacRumors is unable to provide live coverage, but will be offering SMS updates for those unable to watch live coverage. Live coverage is being provided by a number of sites (in no particular order):

We will also be providing consolidated updates at the end of this article as the event unfolds.

- BBC's iPlayer site now has a "Beta BBC iPlayer for iPhone" badge when navigated to with an iPhone (screenshot). Coincidentally appeared on the day of the SDK roadmap. Content is not yet playable on the iPhone.

Additional iPhone news/details to be posted on our iPhone Blog at https://www.macrumors.com/iphone/.