Arstechnica explores a recent Apple patent entitled "Multi-media center for computing systems". In the patent, Apple describes a system involving a central multimedia hub which can use various external "modules". These modules would be controlled by a centralized user interface on the hub itself. 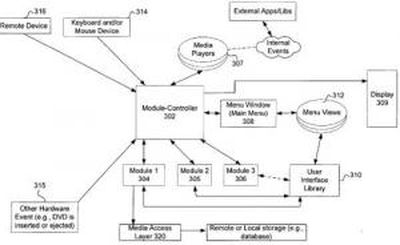 The modules could be any sort of media device - such as an iPod, DVD player, or HD DVD player. The central multimedia hub would coordinate and consolidate all the devices under one user interface.

The clear benefit to the segmented system with external modulesas opposed to an all-in-one deviceis that it would allow customers to add on whatever extra functionality they prefer to the main device. This would allow power users to have all variety of extra modules for storing, playing, and streaming mediaall through a centralized control hubwhile more "average" users could settle for the simplicity of the main Apple TV-like device and just one or two extra modules as they see fit for their lifestyles.

The end product might function as an expandable version of the Apple TV.

Other reports on this same patent speculate that Apple may be thinking of using the iPhone as a remote control for this sort of media hub.