The Smartmi P1 Air Purifier is one of the few air purifiers that include HomeKit integration, allowing it to be added to the Home app and to be controlled with Siri voice commands. Released earlier this year, the Smartmi P1 is a relatively new product, but Smartmi has other air purifiers and home products, and it is a subsidiary of Chinese company Xiaomi. 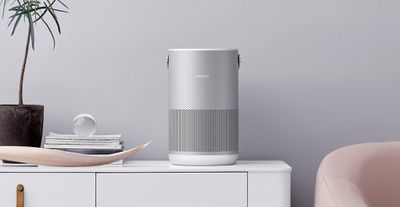 The Smartmi P1 features an attractive circular design that blends well into a home's decor. There's a fan at the top that circulates purified air out, along with holes on the bottom half of the purifier that draw dirty air in through the HEPA filter. There's a convenient handle for carrying the Smartmi P1 at the top, which makes it easy to move from room to room.

Design wise, I liked the look of the P1 and it was unobtrusive in any room that it was in. This is an air purifier meant for smaller rooms, so it's not as big as some other air purifier options on the market. It's a little over 14 inches tall and it's about 8.7 inches in diameter. The Smartmi P1 that I tested is made from a silver aluminum with white plastic accents, but there is also a darker version with gray aluminum and black plastic accents.

Setting up the Smartmi P1 was an absolute nightmare, and I almost canceled the review because of it. The app is not intuitive to use and it took me two days of resetting and redownloading the app to get it to somewhat function. It would not detect my WiFi network during the setup process so I had to manually enter my SSID and password in a hard to find location, and it also struggled with my 2.4/5GHz merged network. Most smart home products have no issue detecting nearby WiFi networks, and I suspect most people are going to have problems with this app.

With setup complete, the app is mediocre at best. The app responds well enough to controls that let me change the air purifier's power level, but that's about all it's good for. I do think you can ultimately use this air purifier without the app and without ‌HomeKit‌, but then you're losing out on some of the main appeal.

Other than controlling the level of the air purifier from the app, I can set a timer to turn it off or on, turn the LCD screen on or off, turn the sound on or off, and see the filter life remaining. I think I'm supposed to be able to see a historical air quality chart based on the App Store screenshots, but this does not work. There's also a feature for listing the air quality outdoors, but I declined to give the app my location information.

There was a firmware update for my P1 that initially would not install no matter what I did, but a week later, it seemed to be able to install fine. I didn't notice a difference in functionality after installing it.

In short, the app is terrible, which is a shame because the air purifier itself seems to be decent enough. When I manually activated it to clean out cooking smells and to clear up the air quality after a candle was burned, it worked in a small space.

It didn't work as well in my kitchen and living room, which are a larger size, but in a smaller bedroom, it was able to better keep the air clean. I'm not sure how well it works at sensing air quality manually, though. I have significant pollen and dust allergies so I have two Dyson air purifiers that I use.

At no time during my testing of the Smartmi P1 did it ever sense enough allergens in the air to kick up its speed on its own. It always seemed to have a PM2.5 reading of 10 or below. At one point, my Dyson air purifier came on and reported a PM2.5 level of 50 and a PM10 level of 54, but even though the Dyson was right next to the Smartmi, the Smartmi did not detect the same particles in the air. It also detected no change in air quality with the smoke from a candle, and it only worked to clear the air from the candle scent/smoke when I manually turned it up.

The Dyson air purifier detected particles in the air, while the Smartmi did not.
Be aware if you're purchasing the Smartmi P1 it only detects PM2.5 and PM10 particles. It does not work with volatile organic chemicals (VOCs) or NO2 like some higher-end air purifiers. You can get an allergen filter (which is the default) or a charcoal (pet) filter that's better for smells. All replacement filters are priced at $40 and need to be swapped out around the one-year mark.

I was able to test the separate charcoal filter and I preferred that to the standard filter because it is better at filtering out smells from cooking, and it should also be ideal for those who have pets and want a filter that will help with any smell related to the pet.

The Home app can be used to turn the Smartmi P1 on or off and it can adjust the level, plus it lets the air purifier be used in different scenes and automations.

There are some other useful features to note. The Smartmi P1 is silent in auto mode, and even at a medium speed, it's not overwhelmingly loud. It has several usage modes you can choose from, and it's easy to take it from room to room with the included handle. Usage modes can be swapped through ‌Siri‌, the Home app, the Smartmi app, or through physical controls on the device itself.

The Smartmi P1 seems like a decent air purifier and the ‌HomeKit‌ connectivity has the potential to be useful for those that need it, but it's crippled by a bad app and a terrible setup experience. Until the Smartmi Link app gets some major updates, I don't recommend the Smartmi P1.

Though not recommended, the Smartmi P1 can be purchased from Amazon for $153.

Wednesday September 22, 2021 12:42 pm PDT by Hartley Charlton
Aqara makes a range of HomeKit-compatible smart home devices that are stocked in Apple Stores around the world. This review takes a look at some of Aqara's latest products, including its TVOC Air Quality Monitor and Aqara Roller Shade Driver E1, which launches today. With these new accessories, I was able to add to the HomeKit setup that I created with some of Aqara's devices earlier this...
Read Full Article • 29 comments

Wednesday September 22, 2021 9:09 am PDT by Eric Slivka
In addition to the sixth-generation iPad mini, the ninth-generation iPad also saw its review embargo lift today, with reviewers generally feeling that the iterative update hits most of the right notes in terms of prioritizing upgrades to storage, performance, and the front camera. Photo via CNET As an overall take, CNET's Scott Stein argues that the "good enough" entry-level iPad actually...
Read Full Article • 89 comments

Wednesday September 22, 2021 6:23 am PDT by Joe Rossignol
The sixth-generation iPad mini will begin arriving to customers and launch in stores this Friday, September 24, and ahead of time, reviews of the device have now been shared by several tech websites and YouTube channels. We've already rounded up video reviews of the new iPad mini, and we've shared some highlights from additional reviews below. The consensus among reviews is that the...
Read Full Article • 122 comments

Tuesday September 7, 2021 11:52 am PDT by Eric Slivka
One of the splashier car introductions for this year is the relaunch of the iconic Jeep Wagoneer brand as an all-new full-size SUV to compete against the likes of the Cadillac Escalade and Lincoln Navigator. The new 2022 Jeep Wagoneer is also available as a Grand Wagoneer, but rather than being a larger version of an already large SUV, the "Grand" designation is used to represent higher trim...
Read Full Article • 76 comments

Monday September 13, 2021 12:33 pm PDT by Eric Slivka
The Acura MDX is Honda's luxury-brand three-row SUV, and with the recent launch of the 2022 model, the MDX now supports wireless CarPlay. The MDX is Acura's first vehicle with wireless CarPlay, and I recently had a chance to check out the updated model and some of its new features. The MDX starts at $47,200, but my test vehicle was equipped Acura's Super Handling All-Wheel Drive, Technology...
Read Full Article • 79 comments

Tuesday June 22, 2021 12:33 pm PDT by Hartley Charlton
Aqara makes a range of HomeKit-compatible smart home devices for multiple regions around the world. This review takes a look at four of Aqara's latest products, including its Temperature and Humidity Sensor and the newly-released Hub M2, as well as the Wireless Remote Switch H1 and Smart Wall Switch H1, which launch today. With these new accessories, I was able to add to the HomeKit setup I...
Read Full Article • 32 comments