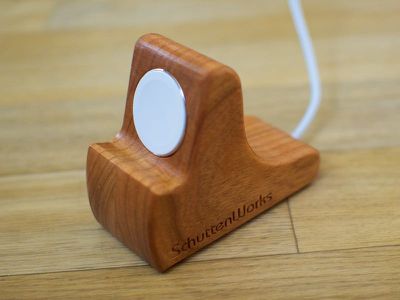 I’ve been using the Ripple on my night table for several weeks now, and I have nothing but good things to say about it. It’s an attractive, low-profile stand that works with all Apple Watch models and all bands, both closed and open-loop, and at $54, it’s not a bad value.

Like its predecessor the Wave, which we reviewed earlier this year, the Ripple uses a clever split design and magnet system to lock the Apple Watch charger in place and keep the cord out of sight.

The two halves of the Ripple are perfectly machined and fit together flush with a nearly invisible seam, so it looks like a single piece of wood that’s been designed around the Apple Watch charging cable. The Apple Watch charger also stays firmly in place, thanks to micro suction tape that rests in the wooden cutout of the Ripple.

Many Apple Watch stands on the market have a large base for stability, but the Ripple does not. Instead, it uses the same micro suction tape that holds the charger in place to keep it firmly adhered to a desk or other flat surface. I have a painted desk that I kept it on, and during the testing process, the micro tape did no damage to my desk, and with the micro tape, the Ripple didn’t shift around at all. It’s a very sturdy setup and I appreciated the small amount of space this stand takes up on my night table.

Since the Apple Watch sits in landscape mode on the Ripple, watchOS 2’s Nightstand mode is fully functional. With the Ripple drawing little attention to the Apple Watch, it lets the alarm clock function of the device shine. It looks great on a night table and it’s easy to read, but the Ripple is a short stand. Some people might prefer something a little taller, but for me, it was right at eye level and simple to see and access in the night.

The Ripple’s small footprint, simple design, and compatibility with all watchOS 2 features make it one of the best Apple Watch stands I’ve used. Its wood design may not appeal to users who prefer stands made of aluminum or another material, but for users seeking a dock with a classic, unobtrusive look, the Ripple is a fantastic choice.

I’ve found the Ripple to be an ideal Apple Watch stand for travel. It’s compact and light enough that it doesn’t take up much room in a bag or suitcase, and it’s a nicer solution than using the Apple Watch charger alone when away from home.

At $54, it’s more expensive than some of the cheaper Apple Watch stands on the market, but it is comparable in price to the higher-quality stands from companies like Twelve South and Mophie, and its build quality makes it well worth the premium cost.

I had few complaints about the Ripple and I don’t hesitate to recommend it to anyone who finds the aesthetic appealing.

The Ripple can be purchased from the Schuttenworks website for $54. It’s compatible with both the stainless steel Apple Watch and the Apple Watch Sport, and it comes in Cherry, Mahogany, and Walnut woods.

That Native Union one is snazzy, but does it work when the band is open? I wouldn't want to fuss with closing up my sport band every night.

Do I need to buckle the Apple Watch around the aluminum arm to start the charging process?

No. What’s great is once the Apple Watch magnetic charging cable is inserted into DOCK, you can simply place the back of your watch onto it, and it will be magnetically secured, even when it’s unbuckled.
Score: 1 Votes (Like | Disagree)

rdlink
I bought this one a few weeks ago. It shipped today. I like it because it's more contemporary looking than this one.

That Native Union one is snazzy, but does it work when the band is open? I wouldn't want to fuss with closing up my sport band every night.

Actually, I pop my sport band closed every night anyway when I'm just using the naked charger. It gives it more stability. That's really the easy one. Just push it onto a pin and voila. The stainless link and leather bands I have (non-Apple) are a bit more of a hassle to close, though.

I like the design of this Schuttenworks stand. I just wish it came in a darker color that looks more contemporary. The wood grain look needs to go back to the 80s... :-)
Score: 1 Votes (Like | Disagree)

Looks good. Aside from the cost of the 3D printer, how little did that actually cost? Maybe you can sell these stands in different color options to help offset some of the cost of that printer?

My work bought the printer for me, so no cost to me! I do buy the filament though. Total cost to actually print this was less then $1 in ABS filament.
Score: 1 Votes (Like | Disagree)

I like this one for the price. But why does Spigen have to plaster their name all over their products?

I agree, on the photos it's annoying, but I haven't really noticed it when on my nightstand.
Score: 1 Votes (Like | Disagree)
Read All Comments