Made from white plastic, the power adapter measures in at 2.8 inches long, 2.1 inches wide, and 0.56 inches thick. Compared to the 29/30W USB-C chargers for the MacBook and the MacBook Air, it's longer, but thinner. 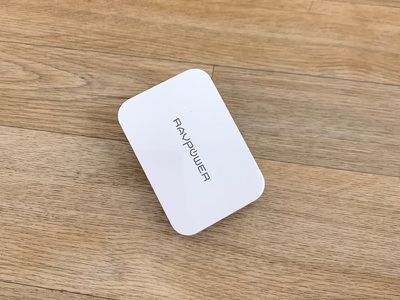 The thinner design allows the power adapter to fit easily in a pocket, bag, or backpack. It's not as oddly square-shaped as Apple's own chargers, which makes it more convenient to carry. RAVPower does not ship this power adapter with any cables, so you're going to need to supply your own USB-C to USB-C cable or USB-C to Lightning cable.

Design wise, this is a nice looking power adapter. The aforementioned white plastic is unblemished aside from a RAVPower logo at the top, and there's a single USB-C port at one side.

RAVPower's adapter next to 29W power adapter from Apple
At the back, there's a set of prongs for plugging it into an outlet, which fold down when the power adapter is not in use. This also allows it to be pocketed or tucked away in a small pouch in a backpack.

When using the 45W RAVPower adapter, I was also able to charge the new USB-C 11-inch iPad Pro faster. With the standard 18W charger it ships with, the iPad Pro charged to 45 percent from 1 percent over the course of an hour.

With the 45W RAVPower adapter, the iPad Pro charged from one percent to 66 percent during the same time period. As a caveat, though, faster charging is available with 29W/30W chargers too, as I was also able to reach a 66 percent charge in one hour using a standard 29W MacBook power adapter. The same goes for iPhone fast charging - 45W offers no benefit over 29W/30W.

On my MacBook, the standard 29W charger charged it to 62 percent over the course of an hour, which is the exact same result I got with the 45W charger, so there's also no benefit using 45W over 29W/30W with a MacBook.

45W is overkill for charging a MacBook, MacBook Air, 11-inch iPad, or iPhone, but it's not enough power for a 13 or 15-inch MacBook Pro under a heavy load (technically you can charge either of these machines with the 45W adapter, but it's not going to be enough when using a lot of power), which makes RAVPower's adapter kind of an odd choice for Apple devices.

I don't really have much else to say about the power adapter. RAVPower makes good products, and the new ultrathin USB-C power adapter is no exception.

It's portable, offers faster charging for the iPhone and iPad Pro, and works well with Apple's MacBook and MacBook Air. It has a foldable plug, and with its thin body, it's ideal for travel because it's not going to take up much space.

RAVpower's power adapter is nice, but it doesn't seem worth the premium over other 30 and 45W power adapters just to save a bit of space. There are many more affordable charging options on the market, and for Apple devices, 30W seems to be the sweet spot for fast charging the 11-inch iPad Pro, iPhone, and the MacBook and MacBook Air so why shell out extra money for RAVpower's solution?

RAVPower does often discount its products, though, so if you're in the market for a pocketable 45W USB-C charger, keep an eye out for a sale before picking this one up.

The 45W USB-C ultrathin charger from RAVPower can be purchased from Amazon for $54.99.

Note: RAVPower provided MacRumors with a 45W power adapter for the purpose of this review. No other compensation was received.

dsraj
How do you review an “ultra thin” product and not include even one photo showing the thickness?

EDIT: Appreciate updating the post with a photo of the side. Thanks Juli!
Score: 10 Votes (Like | Disagree)

How do you review an “ultra thin” product and not include even one photo showing the thickness?

Sorry, thought the comparison photo showed thickness well enough and it has a direct mention in the article. I'll add another photo.
Score: 3 Votes (Like | Disagree)

Now I ain't saying RavPower is some kind of fly-by-night operation with a charger that will wreck your laptop. But I am saying that a _smaller_ charger delivered at a _higher_ price than what Apple charges is a little suspicious.

Literally, the very first sentence of the article explains why. This is built with GaN transistors which are more efficient, cooler, and more expensive than traditional silicon transistors. There's likely supply constraints too.
Score: 2 Votes (Like | Disagree)

gnomeisland
Wouldn’t one advantage of 45w over 30w be if you want to power a hub and the device? The MacBook and the IPad Pro 2018 only have one port and basically need a hub with USB power pass through. In that case the power is decided between the hub (and plugged-in devices) and the device.
Score: 1 Votes (Like | Disagree)

Anyone know what “braided” looking cord is connected to the Apple brick in the 3rd pic? Non of my Apple ones look like that.

Yeah, it's the Stella plug: https://www.macrumors.com/review/ten-one-design-stella-plug/
Score: 1 Votes (Like | Disagree)

I wonder why they didn't go lower power and smaller, or high enough power to support a MBP.

Because 45W actually is more than enough power to go through the day, for most people. Apple's chargers are charged such that you can relatively rapidly charge the laptop from empty to full. This RAVPower adapter is not going to do that. However, to get through the day, you likely don't need more than 30W.

For the last year, I get through the day with a 45W charger. During the day, I use Xcode plus Firefox, Apple Mail, Slack, Excel, TeamViewer and a couple of other apps. Works fine.
Score: 1 Votes (Like | Disagree)
Read All Comments

20 hours ago by Hartley Charlton