Apple fans tend to accumulate old products in their homes, likely on a shelf or in a drawer collecting dust. Rather than letting Apple's history become junk items for dust collection, Grid Studio aims to turn them into artistic wall decoration. 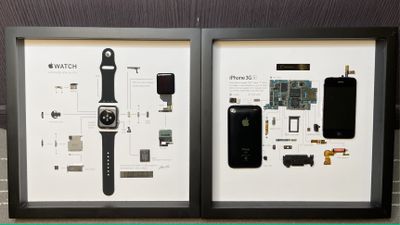 Grid Studio, whose tagline is "Every classic deserves to be framed," takes Apple products and breaks them down component-by-component, placing them in gorgeously labeled, neat, and organized frames for your home or office that beautifully respect the devices' intricate designs.

Grid Studio offers a selection of older-generation iPhones, with the most prized being the limited-edition original iPhone. Grid Studio is only offering 999 of the original iPhones in its frame collection, and each frame comes with a special plaque that lets you know which unit out of the 999. In my case, I received the 197th frame.

Each frame is labeled with the names of numerous components, but also other much-welcomed additions such as their dimensions. Additionally, while the frames come shipped with a transparent plastic cover, they can be removed, allowing you to touch the different components directly. If you do, however, be aware that the components inside are dust collectors and can be challenging to clean.

For this review, Grid Studio sent not only the first-generation ‌iPhone‌ but also the ‌iPhone‌ 3GS, ‌iPhone‌ 4S, ‌iPhone‌ 5, and the original Apple Watch. Besides each frame featuring a different device, they're very similar in design. Each one has the name of the device alongside a short paragraph explaining its introduction and history.

Every device in the collection is genuine, as is each part that's broken down, including the screen, logic board, speaker, and cameras. The lone exceptions are the batteries, which due to safety concerns are replicas. Beyond the level of detail within the frames themselves, Grid Studio also takes into account the packaging.

What's certain is that Grid Studio took into account every possible detail, not only in deconstructing and framing a range of Apple's products but also in the experience from when your package first arrives. For anyone with love for Apple's products or who simply wants to put on display the evolution of products through the years for themselves or as a gift, Grid Studio without a doubt offers a terrific way to do just that.

On its website, Grid Studio offers frames for most of Apple's iPhones, including the ‌iPhone‌ X, first-generation iPhone SE, the ‌iPhone‌ 5S, ‌iPhone‌ 8, and more. Pricing varies depending on the significance and rarity of the devices. For example, the original ‌iPhone‌ frame retails for $599; however, as noted above, Grid Studio offers a limited supply of the original ‌iPhone‌ and it is currently listed as sold out.

Frames for other ‌iPhone‌ models are typically priced at $169 and up, although Grid Studio is currently running a sale. Apple Watch Series 0, as well as the iPod touch, are also available, as are an assortment of other smartphones and handheld gaming systems.

nwcs
Beauty must be in the eye of the beholder. It just isn’t the kinda art for my home.
Score: 4 Votes (Like | Disagree)

StuBeck
Neat idea but for the price I'd expect items to be cleaned up a bit. Having smudges on parts is a bit disapointing.
Score: 4 Votes (Like | Disagree)

arlomedia
After reading the opening paragraph, I thought it was going to be a kit that let you take your own old devices apart and frame them. That seems more useful and meaningful than buying someone else's old device.
Score: 3 Votes (Like | Disagree)

This is really tempting…

I actually still have the original iPhone, original iPad, and original Apple Watch. They all still power up (well, at least as of last autumn when I last tried) so I'm hesitant to deconstruct them to make something like this, but maybe I will someday if their resale value never improves.

Although I will say that there's just something about holding the original iPhone that still gives me goosebumps. It takes me back to waiting in line on that blistering hot June 29, 2007 day and stepping inside the AT&T store where I first held it in my hands. All at once the future of computing sprung to life and felt real to me for the first time as I tapped and swiped at the smooth glass display. I'm not sure if I'll ever have a moment quite like that again in my lifetime where a new piece of tech just knocks the floor out from under me and shatters my pre-conceived notions.
Score: 2 Votes (Like | Disagree)

kesenwangs
I want my OG Homepod framed, like that’s when my favourite Apple product ever. For people who just live and breathe Music, the appreciation for Audio stuff Apple puts out is like ?. Gonna have to be a big frame tho, lol.
Score: 2 Votes (Like | Disagree)
Read All Comments