ExoLens Review: Hands-On With a Professional Photography System for iPhone 6

Apple's iPhone has topped Flickr's list of the top mobile cameras for years, with Apple even surpassing Nikon to be the number 2 camera brand on the service earlier this year. Smartphone photography is booming and there has been no shortage of accessories to help users take even better pictures, and one of the latest entries in this category is the ExoLens system. 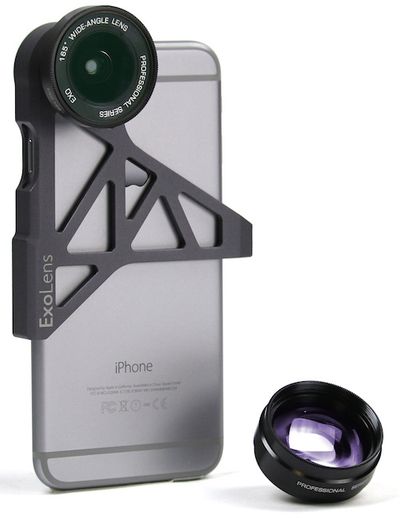 Apple came to us two years ago looking for a higher end lens system for their upcoming devices” says John Willenborg, CEO at ExoLens. “The goal was to engineer something that reflected the quality and precision of the iPhone 6 with the power of a mini DSLR."

What's in the Box

The ExoLens system comprises two lenses -- a 3x telephoto lens and a 165º wide angle lens -- that screw into a machined aluminum bracket that slides onto an iPhone. The bracket has an integrated 1/4"-20 tripod mount, which will also work with some selfie sticks/monopods. Also included are lens caps, a lens hood for the telephoto lens, and a microfiber carrying pouch. ExoLens officially launches today for the iPhone 6 with a retail price of $129.95, with a model for the iPhone 6 Plus planned for release in May.

The ExoLens bracket slides onto an iPhone 6 – it's lined with foam to avoid scratching the iPhone. It takes a fair amount of pressure to insert an iPhone but it's a snug and secure fit, which means the iPhone won't accidentally slide out of the bracket. This is, though, a downside of the ExoLens. It's not possible to use the bracket on an iPhone 6 that's in a case and the bracket is bulky enough to make it cumbersome to leave on an iPhone all the time, not to mention that it doesn't offer much protection to an iPhone to act as a case to begin with. Removing a case from an iPhone, then putting on the ExoLens bracket and attaching a lens takes a minute, so capturing images spontaneously using the system could be difficult.

If you've got a planned event or photo shoot, this probably won't be an issue. The lenses screw into the bracket easily and augment the iPhone's capabilities to take wider landscape images or zoom in on objects or scenery that would normally require using the iPhone's digital zoom.

The bracket has a cut-out for the wake/sleep button on the right side and leaves the bottom of the iPhone completely uncovered. The tripod mount is on the left side and does not interfere with the volume buttons or mute/silent switch. On the back, it's positioned over the iPhone's camera lens so that the included lenses are centered perfectly over it when installed. Notably, it does cover the iPhone's flash. It is for use with the rear-facing camera only, unlike the lens sets recently released by Olloclip, which will work with the front-facing camera too.

While it's easy enough to hold an iPhone steady in your hands using the ExoLens system, it's really optimized for use with a tripod with its built-in tripod mount. The bracket is easy to mount on a tripod and holds the lenses securely, turning the iPhone 6 into a "mini DSLR" as intended.

The Lenses in Action

Taken with the iPhone 6, no lens attached

Taken with the ExoLens telephoto lens (the circle on the right is a drop of moisture, not a flaw in the lens)
The wide angle lens greatly increases the field of view but objects outside of the center of the field of view are noticeably out of focus. Tapping to focus on these objects in the Camera app does nothing to adjust this.

The telephoto lens provides an impressive zoom level but there's significant distortion. In an FAQ, ExoLens states, "All wide-angle and telephoto lenses are going to cause some bending or distorting of the natural world. The more powerful the lens the more the image will distort. ExoLens has one of the most powerful telephoto lenses on the market. To minimize this effect make sure to center the subject in the frame or you can shoot in 'square mode'."

Below are pictures captured with an iPhone 6 with no lens attached (top) and the 3x telephoto lens attached (bottom) on a subject indoors. With a single subject at a shorter distance, the distortion is less noticeable.

The lenses do greatly enhance the iPhone's capabilities but the distortion with the telephoto lens and out-of-focus edges with the wide angle lens, even though expected and normal, can be distracting. However, it's possible to work around this by considering your subject, the distance to it, and adjusting accordingly.

Who Is It For?

With its built-in tripod mount, the ExoLens system is ideal for those who don't have or don't want to use a DSLR but do want the ability to mount an iPhone on a tripod to capture better portraits or images of scenery. As a point-and-shoot solution for spontaneous image capture, the ExoLens is less ideal with the time it takes to slide the bracket on and attach a lens, particularly if you have a case to remove from the iPhone first.

At $129.95, the ExoLens system is not cheap though it does beat buying a DSLR camera, which would cost at least a few hundred dollars. If you already have a tripod or selfie stick/monopod and want to take staged pictures at family events or on vacation and can adjust to accommodate or avoid the distortion and focus issues, the ExoLens system could be a great portable solution to augment your iPhone's photographic capabilities.

The ExoLens system for iPhone 6 can be purchased from Apple's online store for $129.95.

It's pretty bad when an image resized for the web has readily apparent reduced image sharpness. Even worse, the corners look atrociously soft and smeared with some vignetting. You don't even have to pixel peep to see how bad this is. I think I even see some chromatic aberration which you usually only see at 100% on mediocre glass. And while some barrel distortion can be expected at such a wide anglethe telephoto shots are way too pincushion distorted. It's like the lens designers didn't even try. And yes, it's possible to make a decent lens for cheap. Look at the Canon nifty fifty. If this was even half as good as that then it would be a massive improvement.

If this was marketed as a lens for a "cheap toy camera look" then it might sell better. Some people enjoy that look to their photos. Nothing wrong with that. But for general photographic use? No joy. You're better off spending about that much on a point and shoot which probably takes up about as much space as carrying this thing around separatelywhich is especially annoying if you use a case.
Score: 13 Votes (Like | Disagree)

But the real comparison here should not be to a DSLR, but to a small point-and-shoot costing $130 or less. Those aren't any larger than a bag with all of this junk in it, but would deliver nearly infinitely better quality. If one were willing to carry around an extra bag, might as well carry around a real camera instead of this.
Score: 4 Votes (Like | Disagree)

ctrlshft
The reality is that a better camera solution needs to come from Apple, not from weird peripherals that are limited by iPhone version. Even with the painstaking effort put into the designs, they are ultimately inferior to a better built-in solution from the manufacturer. Who knows, maybe Apple will offer diff cam versions in upcoming devices. The various flavors they offer now is a testament that they are becoming motivated to try new things. Time will tell.
Score: 3 Votes (Like | Disagree)

BMcCoy
The pics look better from the iPhone by itself...
Score: 3 Votes (Like | Disagree)

mkeeley
"The goal was to engineer something that reflected the quality and precision of the iPhone 6 with the power of a mini DSLR." Well you failed dismally!
Score: 2 Votes (Like | Disagree)

dredlew
ExoLens states, "All wide-angle and telephoto lenses are going to cause some bending or distorting of the natural world. The more powerful the lens the more the image will distort."

Ugh no, telephoto lenses are not supposed to bend or distort, they compress. If a telephoto lens distorts your image, there is something seriously wrong with it. While the wide-angle can be expected to distort (I was surprised it wasnt more), having it sharp across the frame is the big challenge. And it that regard, its pretty disappointing too.

The Moment lenses would be a much better option. Especially once they launch their shutter cases.
Score: 2 Votes (Like | Disagree)
Read All Comments

Sunday January 16, 2022 3:37 pm PST by Joe Rossignol
A bug in WebKit's implementation of a JavaScript API called IndexedDB can reveal your recent browsing history and even your identity, according to a blog post shared on Friday by browser fingerprinting service FingerprintJS. In a nutshell, the bug allows any website that uses IndexedDB to access the names of IndexedDB databases generated by other websites during a user's browsing session....
Read Full Article • 224 comments