Though it's been more than two years since the launch of the iPhone 12 lineup with MagSafe technology, the first 15W ‌MagSafe‌ car charger just came out, with Belkin introducing it in early November. 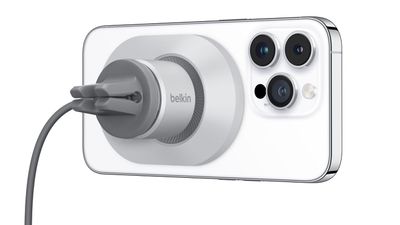 The Boost Charge Pro Wireless Car Charger with ‌MagSafe‌ is the first magnetic car charger able to charge ‌MagSafe‌ iPhones at up to 15W. There were prior in-car magnetic solutions for ‌MagSafe‌ iPhones, but they were limited to a maximum of 7.5W.

The rubber vent clip is well-designed and fits securely to a vent, with a strong enough attachment that it does not shake, vibrate, or otherwise shift around when driving, something that can be a problem with some vent mount accessories.

The ‌MagSafe‌ magnet adheres securely to the ‌iPhone‌, and it too stays in place while you drive. If you're going over super rocky terrain or are in an accident, there's a chance it would detach, but in day to day usage, it feels like it will stay put and I didn't run into any issues with magnet strength during testing.

A cable attaches to the back of the Belkin Car Charger, and the USB-C connector plugs into a 12V car adapter that in turn plugs into a standard car plug. The USB-C cable can be used without the adapter if you have a vehicle that has USB-C ports, but it does not detach from the charger itself.

The Belkin Car Charger cannot be used as a mount with the cable detached for that reason, and it also prevents another accessory from being used. Some in-car devices, such as the Spotify Car Thing, include an extra port as most people may want to use more than one accessory at a time rather than picking and choosing. The Car Thing has a pair of USB-A ports, one for powering the device itself and one for a second accessory, for example.

That's not an option on the Belkin Car Charger, so if the 12V car plug is all you have, you'll only be able to use the car charger. That may not be a concern for most people who have cars with multiple ports available, but I thought I'd mention it for those who may be accustomed to accessories with more than one port.

The cable can be unwieldy as there are no clips to hold it into place and route it down, though Belkin does include a cable cord for wrapping up excess cable. I'd still recommend some other kind of cable management clip for a more streamlined look and to keep the cable out of the way.

An ‌iPhone‌ can attach to the Belkin Car Charger in either landscape or portrait mode, with landscape mode useful for apps like Maps. The faster charging speed is convenient when you're low on battery and need to power up in between short trips. In my testing, the charger did charge at the same rate that standard ‌MagSafe‌ chargers charge at, maxing out at 15W, though temperature and other factors can have an impact on charging speed.

‌MagSafe‌ is, of course, super convenient. You can pop your phone on the stand when you get in the car and quickly grab it when you get out, no unplugging of cables or hassle. It's simple to use, secure, and the charging speeds are noticeably faster than Qi-based chargers.

The biggest downside about the Boost Charge Pro Car Charger is the price tag. $100 is expensive for a single device charger, though as we've come to learn, ‌MagSafe‌ accessories are pricey, in part due to the licensing fees that Apple chargers third-party manufacturers.

Aside from the price, Belkin's Car Charger has few downsides. There is a strong connection between the ‌iPhone‌ and the charger that keeps it in place, and it also adheres strongly to the vent, which is even more important. It does not move and it stays in place while you're driving, plus it's the fastest wire-free charging you can get in a vehicle at this time.

The Boost Charge Pro Wireless Car Charger with ‌MagSafe‌ can be purchased from the Apple Store or from the Belkin website for $99.95.

TheYayAreaLiving ?
Should have priced it at $49.99. That would have been a reasonable price.
Score: 15 Votes (Like | Disagree)

xxray
Imagine how degraded the battery would get running GPS with screen at full brightness while wireless charging at 15W on a hot summer day.
Score: 10 Votes (Like | Disagree)

Kylo83
But I need CarPlay so get power through the head unit
Score: 7 Votes (Like | Disagree)

Should have priced it at $49.99. That would have been a reasonable price.

Agreed!! No way am I paying $100 for a single device charger for my car
Score: 7 Votes (Like | Disagree)

jz0309
I appreciate these reviews, but usually scroll to the bottom right away to see the price - and then shake my head ;(
Score: 5 Votes (Like | Disagree)

But I need CarPlay so get power through the head unit

Yea even if you could also get a cable into the device, wouldn't that disable wireless. And I bet even with slower wired you'd still beat "15W" wireless with the inefficiency.
Score: 3 Votes (Like | Disagree)
Read All Comments