Apple designed the AirTags without any kind of hole or attachment point to connect them to keys, bags, and other items, which has opened up a whole new market for AirTag accessories. 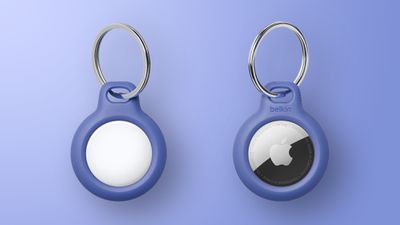 Apple's own AirTag add-ons are priced starting at $29, which is the same price as a standalone AirTag, so it's quite an investment to use one of those. Luckily there are plenty of third-party AirTag accessories that are already available on the market, and Belkin is one of the first companies to come out with an ‌AirTags‌ solution.

The Key Ring and the Strap actually feature identical designs, but one has a key ring to attach to a set of keys or a zipper and the other has a loop type nylon strap that can be used for backpacks, luggage, and other items.

Each Secure Holder comes out of the packaging in two halves that are designed to twist together and lock in place. The Secure Holders are made from a hard plastic material rather than a soft material, and there's an opening at the top of each one that serves as an attachment point.

You need to line the AirTag up in the middle of the holder and them slide the two halves of the holder into place. From there, you can attach either the key ring or the strap to the top and use it as normal.

There are grooves at the top of the Secure Holder that serve as a guide for how to twist it apart to get the AirTag out. Some people who have used these have noted that they're difficult to get separated, especially if you put the two halves together without putting an AirTag in first, but I haven't had an issue so far.

I put one of my thumbs on each groove and then twist one side up and one side down to get the Secure Holder apart. I have not had the holder come apart without deliberately trying to take it apart in my testing, so it seems durable enough to house the AirTag.

The design of the Secure Holder leaves a bit of a plastic lip around all sides of the AirTag, which Belkin says is for scratch protection. I think you're potentially still going to see scratching on the stainless steel side of the AirTag over time just because these are meant to be exposed to keys and other items, but the lip may help cut down on the worst of the scratching.

I have no issues with the strap or the key ring, and both seem durable enough. The key ring is a standard silver key ring you might see attached to any keychain, while the strap is made from a braided material with a plastic lock at the top holding the two ends together.

I don't think it's a great idea to hang an AirTag outside of a piece of luggage, a bag, or a backpack when there's ample room inside for storage purposes, but the strap will come in handy if you need to use it for something where internal storage is not an option. The key ring is of course ideal for keys, though you could also stick it on a zipper on a bag or jacket.

If you're looking for an affordable and effective accessory to attach your AirTag to various items, I think Belkin's Secure Holders are worth checking out.

Simiber
$12 something may be affordable... but its still a rip for a tiny piece of plastic...
Score: 16 Votes (Like | Disagree)

rustbat
I printed my own. Downloaded an STL file from Thingiverse. Probably less than 5 cents of filament.
Score: 9 Votes (Like | Disagree)

I printed my own. Downloaded an STL file from Thingiverse. Probably less than 5 cents of filament.

you need the 250 dollar printer tho.

I have two of them so I get it but you didn't include an important part of the process.
Score: 6 Votes (Like | Disagree)

Sebosz
$13 and shipped by June? I just bought two airtag keyrings from Amazon for $3.50 each ?? And I’ll receive them tomorrow.
Score: 5 Votes (Like | Disagree)

These things cost like 4$ to produce and to ship, so I don´t see why I would pay over 10$. Especially when Amazon ships similar items for less than 5$.

Guessing you have never ran a business?

No serious "company" would call at COST. it's called your profit margin.
Score: 4 Votes (Like | Disagree)

54 minutes ago by Hartley Charlton