Belkin, known for its range of accessories for Apple devices, recently launched the Boost Charge 3-in-1 Wireless Charger, which can charge the iPhone, Apple Watch, and AirPods all at once. 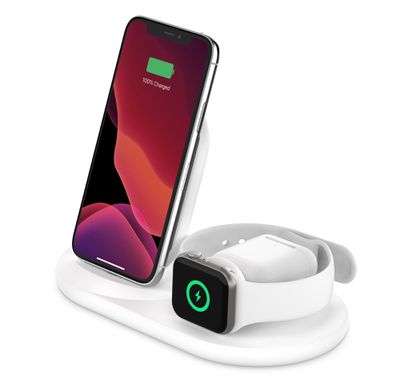 Priced at $110, Belkin's 3-in-1 Wireless Charger is more affordable than most other 3-in-1 wireless chargers on the market, making it an attractive option.

Available in either black or white, the 3-in-1 Wireless Charger from Belkin is made from a plastic material. It's not the best quality charger out there because of the all-plastic build, but it looks simple and unassuming on a desk.

There's an upright wireless charging interface that can accommodate an ‌iPhone‌, an Apple Watch charging puck, and behind that, a small circular divot for the AirPods or AirPods Pro case. Many other 3-in-1 wireless chargers have enough space for charging two iPhones at once, but this one is designed specifically for a single ‌iPhone‌ and AirPods, which is something to be aware of.

With the AirPods charging space located right behind the watch, I did have a few instances where my Apple Watch knocked my AirPods out of position or my AirPods nudged my Apple Watch due to the Sport Loop overlapping where the AirPods charge. I had to be careful to position things correctly, and I think this crowding is going to be a slight issue for anyone who has a loop-style band.

The upright charging space for the ‌iPhone‌ is nice because it makes it easy to put the ‌iPhone‌ down and go, with no need to position it or make sure it's in the right spot to initiate charging, something that's often an issue with a typical flat wireless charger. Other than the crowding issue depending on the Apple Watch band I was using, I liked the design of the AirPods charging space because it's clear where the AirPods need to go to properly charge.

As for the Apple Watch charging puck, it's fine. It charges the Apple Watch in Nightstand Mode like many other charging options on the market. There are small LEDs on the front and side of the charger that let you know when it's powered on and charging something, and a single power cord sticks out from the back. These lights can't be disabled and could be a bit irritating at night, but I wasn't bothered too much by them.

This is a 7.5W wireless charger so it charges iPhones at the maximum speed possible, which is not super fast. It's great for charging overnight or when you just need a bit of juice, but it's not the best solution when you need power quick.

In my testing, all three charging spaces worked as expected and I ran into no issues, with everything charged at the expected speeds.

A lot of the 3-in-1 wireless charging options on the market are priced at around $150, so it's nice to have a name brand option that's more affordable and reliably charges the ‌iPhone‌, Apple Watch, and AirPods all at once.

$110 is still a lot more than individual charging options for the three devices, so it's still somewhat of a luxury. I didn't think the Belkin's 3-in-1 Wireless Charger was the best looking option, but I appreciated the small footprint and the price tag. It is a bit of a hassle to make sure the Apple Watch and AirPods are lined up at times when using a loop-style band, but I didn't think the minor inconvenience was a dealbreaker.

Belkin's 3-in-1 Wireless Charger is priced at $120, but it can be purchased at a discount from Amazon for $110, and often, prices drop even lower.

Note: Belkin provided MacRumors with a 3-in-1 Wireless Charger for the purpose of this review. No other compensation was received.

Trik
How did we get to a place where $110 for a charger is described as "affordable" ... All of these 3 in one solutions are horribly overpriced.
Score: 13 Votes (Like | Disagree)

Joniz
I am sick of companies adding LEDs to everything with no way to turn them off.

So much of my tech (including things as mundane as a waterpik) has black tape over it, though in some cases I’ve been lucky and able to remove the danged thing by busting it open and yanking it out with a pair of needle-nose pliers like it’s a rotted tooth.

Airforcekid
$110 seems high Ive seen knockoffs for $20ish on Amazon which is what Ive always used without issues.
Score: 5 Votes (Like | Disagree)

Affordable relative to other three-in-one wireless chargers out there.

Come on... :rolleyes:
A simple search on Amazon with keyword "3 in 1 wireless charger apple" already prove my point.
Score: 5 Votes (Like | Disagree)

Come on... :rolleyes:
A simple search on Amazon with keyword "3 in 1 wireless charger apple" already prove my point.

I did waffle over using "affordable" because I figured I'd get comments like this, but for a brand name 3-in-1 wireless charger that works well and comes from a reliable company with reliable safety ratings, this is comparatively affordable. There are some other options on Amazon, yes, but many of those aren't fully wireless
Score: 4 Votes (Like | Disagree)
Read All Comments