Actionproof's Bozon Apple Watch stand is unique in a sea of Apple Watch accessories because of its unusual, quirky shape. It looks more like a toy or a modern art piece than a traditional stand, but it ended up being easier to use and more functional than some of the other Apple Watch stands I've tested.

Made from a soft black silicone, the Bozon features a pliable black palm-sized sphere-shaped top attached to four legs for stability. Like most Apple Watch stands, you need to supply your own charging puck, which fits into the front of the Bozon. The interior of the Bozon is hollow, allowing it to store excess cord. 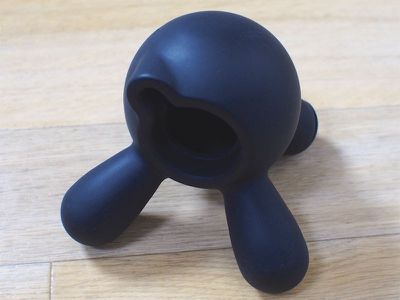 Setting up the Bozon with the Apple Watch charger was surprisingly simple, especially when it came to winding up excess cord. There are a lot of Apple Watch docks and stands out there that hide extra cord, but most do so in a more convoluted way. With the Bozon, it was simple, quick, and elegant.

The first step to installing the Apple Watch charger in the stand is to fit the charging puck into the front opening. It fits in at a downward angle, and there's an extra slot that houses the portion of the cable that connects to charger. From there, the cord goes into the middle of the Bozon and out through the rear right leg, which has a removable cap.

Once the charger is in place, extra cord is pushed back into the interior of the Bozon through the leg, until it's as short as desired. The small inner space was able to hold all of the excess cord from a standard 2m Apple Watch charging cable. When the extra cord is inside the Bozon, the leg cap fits back on over the cord for a neat, clean look. The leg cap doesn't fit tightly on the Bozon, so I did have it come loose a few times, but it wasn't a big deal when it was stationary on a desk.

An Apple Watch fits around the Bozon's round top in landscape mode, with the band resting on the legs for stability. The Apple Watch is largely held in place via the magnetic connection between the watch itself and the charger and that connection, along with the legs and the round body the band wraps around, keeps the Apple Watch from falling off or shifting around. I had no concerns that my Apple Watch would be knocked out of place or fail to charge, and I tested it with both 38mm and 42mm Apple Watches.

The Bozon supports open or closed-loop bands, but it works (and looks) best when open-loop bands like the Apple Watch Sport are wrapped around the body and fastened. I have a small/medium Apple Watch Sport band on my 38mm Apple Watch and that's the smallest band that would fit on the Bozon -- too close, it needs to be fastened at the last hole.

I have some third-party bands that are smaller than the small/medium Apple Watch Sport band and these do not fit on the Bozon. I have smaller wrists than the average person, though, so this is not likely to be a problem for most people. It's still something to be aware of.

My stainless steel Apple Watch charger fits flush in the Bozon, but the larger Apple Watch sport charger will protrude slightly, which doesn't seem to have an impact on how well the charger works. The Bozon is made entirely from silicone, so there's no danger that any part of the stand will scratch or otherwise damage an Apple Watch.

With its four widely-spaced legs, the Bozon is stable on any surface, but it's also compact enough not to take up a lot of room and short enough that it's not going to get jostled or knocked around on accident even in high traffic areas. Plus, the silicone it's made of is grippy enough to keep it firmly place on a flat surface.

When I first saw the odd design of the Bozon, I was skeptical that its shape was going to prevent it from being as functional as some of the other Apple Watch stands on the market, but as it turns out, there are a lot of clever design choices here. The Bozon's four legs keep it stable, the soft silicone prevents scratches, and the hollow body holds a lot of excess cord.

As an added benefit, it's cute. Not everyone is going to like the design of the Bozon, but I found it to be a refreshing change of pace from more traditional stands. It kept my Apple Watch firmly in place without taking up a lot of desk space. I've tested quite a few Apple Watch charging solutions and the Bozon is one of my favorites, both for the reasons listed above and because it's so easy to get my Apple Watch charger in and out if I need it for travel. The Bozon also has the best method for dealing with excess cable that I've seen yet.

The only real downside to the Bozon is its price tag. It's priced at $39.99, which is cheaper than many stands on the market, but it still seems pricy for a silicone stand with no premium materials. If you like the look of the Bozon and don't mind the price tag, it's worth picking up. It's not just eye candy - this is a stand that has a lot going for it.

Of course, if you have an Apple Watch with a Link Bracelet or a third-party bracelet that's similar in weight, you'll probably want to avoid the Bozon.

The Bozon Apple Watch Charging Dock can be purchased from Amazon for $39.99.

Note: Actionproof provided a Bozon stand to MacRumors free of charge for the purposes of this review. No other compensation was received.

These stands run $9.99 and work just as well. I have a green one that works great. 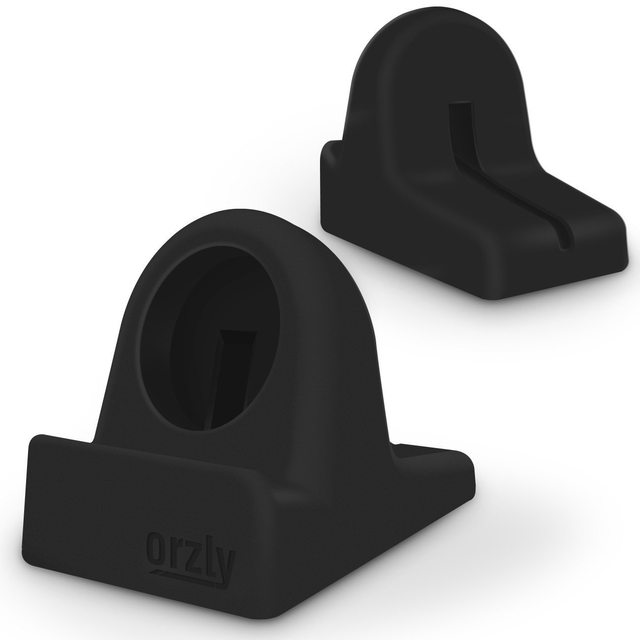 I had it. It was so bad and ugly, I threw it away. For 9.99 I shouldn't have been surprised. You get what you pay for. This should only be purchased by someone who absolutely can't afford anything better.

Wat? It's no uglier than the stand reviewed here. It's basically the same thing. A cheap piece of rubberized plastic that holds your Apple Watch. Only the one reviewed here costs 4x more.
Score: 1 Votes (Like | Disagree)