How to View Shazam Music Recognition History on iPhone and iPad

In iOS 14.2 and later, Apple includes a Shazam Music Recognition feature for the Control Center, giving iPhone and iPad users a quick and easy way to identify what music is playing without them having to download the Shazam app. 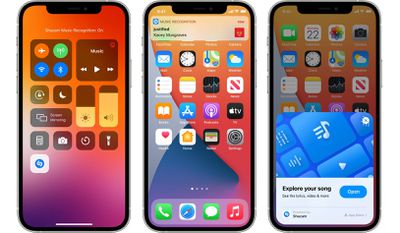 If you've identified a few songs using the Music Recognition feature and you want to see a list of previously identified songs, simply launch the Control Center and long press the Music Recognition button. If you also have the Shazam app installed on your device, tapping individual songs in the list will open the app with the song information selected.

Note that the Music Recognition feature now syncs with the Shazam app, and Shazam song history is also synced across devices, meaning it will show all songs identified from any device signed into the same Apple ID, regardless of whether it was done via the app or Control Center.

Apple acquired Shazam in 2018 for a reported $400 million and has been steadily improving the service since by removing ads from the app and more. In September 2021, Apple announced that the Music Recognition feature in Control Center had surpassed one billion cumulative recognitions across the ‌iPhone‌ and ‌iPad‌ since launching.

Friday May 6, 2022 8:58 am PDT by Tim Hardwick
In iOS 14.2 and later, Apple includes a new Shazam Music Recognition toggle for the Control Center, giving iPhone, iPad, and iPod touch users a quick and easy way to identify what music is playing without them having to download the Shazam app. This article explains how it works and how to enable it. For those unfamiliar with Shazam, it's designed to listen for music that's playing,...
Read Full Article

How to Access Control Center Without Touching Your iPhone's Screen

Thursday April 14, 2022 2:47 pm PDT by Tim Hardwick
Activating Control Center on an iPhone with no Home button usually involves sliding your finger diagonally down from the top-right corner of the screen. If your other hand isn't free, this isn't very convenient, but fortunately there's another way of accessing Control Center that doesn't even require you to touch the screen. It uses something called Back Tap, an accessibility feature that...
Read Full Article

How to Use Apple Music With Waze

Tuesday May 31, 2022 4:19 pm PDT by Tim Hardwick
Community-driven GPS navigation app Waze recently gained support for Apple Music integration, making it easier and safer for Waze users to enjoy the ‌Apple Music‌ catalog from within the Waze app while traveling. This article explains how to set up the feature. Waze is a popular Google-owned maps app that is unlike many other maps apps because it uses user-submitted travel times and...
Read Full Article

Monday August 15, 2022 4:30 pm PDT by Tim Hardwick
If you are looking for an easy way to identify the species of plants and flowers that doesn't involve reaching for a taxonomy book, then try your iPhone. You don't even need to purchase an app, because in iOS 15 and later, Apple's software includes a feature called Visual Lookup that will do just what you need. Since iOS 15, Apple has made advances in its on-device machine learning and...
Read Full Article

Wednesday June 29, 2022 1:29 pm PDT by Tim Hardwick
Every watch face on Apple Watch is supposed to include a swipe up interaction to reveal the Control Center and its menu of buttons, and a swipe down interaction to reveal notifications. The only problem is, due to an undisclosed and intermittent bug, sometimes these interactions simply won't work when you try them. This article runs through some possible solutions. Since updating to watchOS...
Read Full Article • 36 comments

How to Change iPhone Rotation Lock Without Opening Control Center

Monday April 18, 2022 2:53 pm PDT by Tim Hardwick
On iPhone, Apple includes a Rotation Lock feature that when enabled locks the screen orientation so that it doesn't change when you rotate the device. Rotation Lock is usually enabled or disabled by invoking Control Center and then tapping the Lock Orientation button, but you can actually turn it on and off a lot quicker without even touching your iPhone's screen. The method uses something...
Read Full Article

iOS 16: How to Silence Notifications From Specific Apps When in a Focus Mode

Tuesday August 2, 2022 10:49 am PDT by Tim Hardwick
In iOS 16, currently in beta, Apple has made several improvements to Focus Mode, a feature that aims to help reduce distractions and let you zone in on a single thing. Part of the way Focus does this is by filtering notifications based on what you're doing, and in iOS 16, Apple has added even more control in this area. In ‌iOS 15‌, you could only choose the allowed apps and allowed...
Read Full Article

iOS 15.4: How to Adjust Magic Keyboard Brightness on iPad From Control Center

Friday January 28, 2022 5:32 pm PST by Tim Hardwick
If you use an Apple Magic Keyboard with your iPad, you might be interested to know that Apple has added an optional setting in iPadOS 15.4, currently in beta, that allows you to adjust the brightness of the keyboard's backlighting. To access the Keyboard Brightness option, you'll first need to add it manually to the Control Center. The following steps show you how. Launch the Settings app...
Read Full Article

Wednesday August 17, 2022 9:51 am PDT by Juli Clover
Apple is aiming to hold its first fall event on Wednesday, September 7, reports Bloomberg's Mark Gurman. The event will focus on the iPhone 14 models and the Apple Watch Series 8. The standard iPhone 14 models are expected to get few changes, but the iPhone 14 Pro models will include updated camera technology, the removal of the notch in favor of a pill-shaped and hole-punch cutout, an A16...
Read Full Article • 165 comments