In watchOS 9, Apple has added a new Low Power Mode for Apple Watch Series 4 and later that is designed to extend the battery life of your device beyond the usual "up to 18 hours" of life on a single charge in normal use that Apple advertises. Keep reading to learn how the function works and how to enable it. 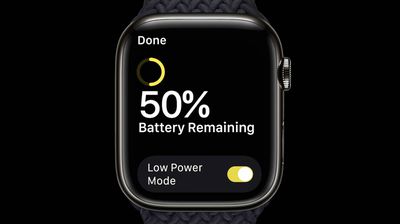 For some years now, many Apple Watch fans have been clamoring for a new model that offers significantly more battery life than "up to 18 hours," which is the life that Apple has advertised ever since the first Apple Watch model was launched.

In 2022, Apple finally answered those calls with Apple Watch Ultra, which offers up to 36 hours of battery life on a single charge in normal use.

Truthfully though, the ‌Apple Watch Ultra‌ is a fairly niche device with many more features (and a significantly higher price tag) than the average user is going to need, but the good news is that with ‌watchOS 9‌, Apple also introduced a new Low Power Mode for Apple Watch Series 4 and later models that can eke out more life from these more commonly used devices.

The new Low Power Mode is separate from the Apple Watch's existing Power Reserve mode that only displays the clock when enabled. It's also important to know that the new Low Power Mode works by disabling or affecting a number of specific features on Apple Watch that we've detailed below. Make sure you carefully read the list so that you know what is not functional when the mode is turned on. The steps for enabling Low Power Mode in general use and for workouts can be found below.

Features Turned Off When iPhone Isn't Nearby

Here's how to turn the feature on manually on an Apple Watch Series 4 or later running ‌watchOS 9‌ or later.

When your Apple Watch is in Low Power Mode, a yellow circle icon appears at the top of the screen. Also, the battery percentage button in Control Center, the charging animation, and the time in Nightstand mode all turn yellow.

How to Enable Low Power Mode for Workouts

You can also set your Apple Watch to automatically enter Low Power Mode whenever you start a workout, which is particularly useful if you plan to work out for a long time without it draining battery. Note that when you use the Workout app in Low Power Mode, metrics such as heart rate and pace are still measured.

Note that when Low Power Mode is enabled without your iPhone nearby, and you open an app that requires a data connection, Wi-Fi or cellular connectivity will resume so that the app can function properly, which can cause "significant battery consumption," according to Apple. Also, bear in mind that missed phone calls and notifications are retrieved periodically whenever your Apple Watch is in Low Power Mode.

Friday September 23, 2022 2:10 pm PDT by Tim Hardwick
With the debut of watchOS 9, Apple introduced new workout features that aim to take your personal fitness to the next level. One of these new features is heart rate zones. This article explains what they are for and how to use them. Apple has leaned further into fitness with the release of each new version of watchOS, and the latest version, watchOS 9, adds more metrics to your wrist than...
Read Full Article

Friday September 23, 2022 2:38 am PDT by Tim Hardwick
Apple Watch Ultra comes with a built-in Night Mode that puts a red filter on the display. Keep reading to learn how to use it. To optimize for evening conditions, Apple Watch Ultra features a Night Mode that turns the interface red and removes retina-altering blue light from the display to ease strain on your eyes in the dark. On other Apple Watch models, if you look at your watch or...
Read Full Article • 43 comments

Wednesday September 28, 2022 9:17 am PDT by Tim Hardwick
With the debut of watchOS 9, Apple introduced new workout features that aim to take your personal fitness to the next level. For example, you can now display running form metrics to your Apple Watch display during running workouts. This article explains what the new metrics are and how you can enable them. Apple has leaned further into fitness with the release of each new version of watchOS, ...
Read Full Article

iOS 16: How to Activate Low Power Mode With a Focus

Tuesday July 19, 2022 4:42 pm PDT by Tim Hardwick
Introduced in iOS 15, Focus mode is an expansion of Do Not Disturb that allows you to set up different permissions for apps, contacts, and more depending on what you're doing. In iOS 16, Apple has expanded what Focus modes can do with new features, including the ability to activate Low Power Mode on your device when a specific Focus in enabled. Here's how it works. In iOS 16, the Focus...
Read Full Article

iPhone Not Unlocking Your Apple Watch? Here's How to Fix the Problem

Thursday September 15, 2022 4:36 am PDT by Tim Hardwick
On Apple Watch, there's an option in watchOS that lets your iPhone unlock your watch as long as the iPhone is unlocked (Settings -> Passcode -> Unlock With iPhone). Enabling this option means you don't have to input a passcode twice in the morning – one on your Apple Watch when you put it on your wrist, and one on your iPhone when you unlock it for the first time. However, we've heard...
Read Full Article

Apple Watch Ultra: How to Use the New Optimized Charge Limit Feature

Friday September 23, 2022 2:00 am PDT by Tim Hardwick
All Apple Watch models running watchOS 7 or later include a Battery Health feature called Optimized Battery Charging that extends the total battery life of your Apple Watch by learning from your habits and waiting to finish charging all the way up until you need your ‌Apple Watch. Apple Watch Ultra can last up to 36 hours on a single charge – the longest battery life of any Apple Watch ...
Read Full Article • 9 comments

Wednesday June 29, 2022 1:29 pm PDT by Tim Hardwick
Every watch face on Apple Watch is supposed to include a swipe up interaction to reveal the Control Center and its menu of buttons, and a swipe down interaction to reveal notifications. The only problem is, due to an undisclosed and intermittent bug, sometimes these interactions simply won't work when you try them. This article runs through some possible solutions. Since updating to watchOS...
Read Full Article • 36 comments