Apple in the iOS 14.5 beta added a new option to help Siri learn to select your preferred audio apps for listening to music, podcasts, and audiobooks, a feature that will undoubtedly be appealing to non-Apple Music fans. 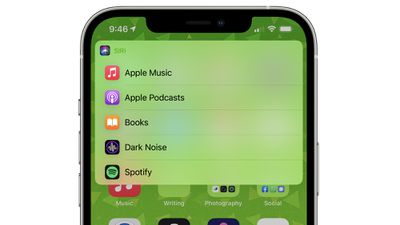 When you ask ‌Siri‌ to play a song, album, podcast, or book, ‌Siri‌ will prompt you for your preferred app. This is not a default setting, but ‌Siri‌ will use this information to learn your app preferences and will select the apps you want to use when you make requests.

There is no specific toggle for you to turn on to select a music service, and ‌Siri‌ may ask again, but this is a way to get ‌Siri‌ to choose the apps you use instead of automatically opening default apps like Apple Music.

How to Choose a Preferred Music Service Using Siri

‌Siri‌ will tell you which music app was selected when the song plays, and you can also see an icon from the music app in the Now Playing window.

It's been possible to play music from other services by clarifying which service you want ‌Siri‌ to use, such as "Hey ‌Siri‌, play music on Spotify," but the change implemented in iOS 14.5 makes the ‌Siri‌ remember your music app of choice so a simple command like "Hey ‌Siri‌ play music" will use your favorite app rather than defaulting to ‌Apple Music‌. This also works for podcasts, audiobooks, and other audio content.

How to Change Your Default Music Service

At the current time, there's no ‌Siri‌ command or music setting to manually change the default music app that you've set through the ‌Siri‌ There is no option for manually changing your preferred music service as this is meant to be a ‌Siri‌ intelligence feature where ‌Siri‌ learns preferences over time.

‌Siri‌ will also occasionally bring up the popup asking you which app you want to use when you make a request so that it can keep current with your preferences.

eicca
I just want the shuffle algorithm to not pick the same ten songs over and over again.
Score: 6 Votes (Like | Disagree)

I just want the shuffle algorithm to not pick the same ten songs over and over again.

KanosWRX
THANK GOD! Been waiting for this. Now just let me switch my default assistant to Google and ill be a happy iPhone user ;)
Score: 3 Votes (Like | Disagree)

iGüey
What Apple should do is to return to origins. I mean, I felt in love with Apple thanks to the iPod, the originals, the classic ones. It was so simple to play all our music there that actually is the device that vamped the way of Apple to relaunch the company and lead to it’s current success (obviously they took a step by step way). Now is really sad that Apple Music is almost forgotten by Apple. So I truly think they should reengineer the Music App from zero, respecting all aspects that made iPod great and one of the most iconic devices for our generation, at least as a way to honour all customers that have been with Apple since then, supporting Apple to become what today is.
Score: 3 Votes (Like | Disagree)

dynamojoe
Now I just need an app that I can use to play my music without nagging me to try a free subscription.
Score: 3 Votes (Like | Disagree)

MrGuder
You know that Apples music app is getting bad when they now allow you to change the default to another player. ?
I’m using Marvis Pro and love it’s design!!
Score: 3 Votes (Like | Disagree)
Read All Comments