How to Put an AirTag in Lost Mode

Apple's AirTags are small, coin-shaped devices that can be attached to items like keys and wallets to allow these accessories to be tracked using Bluetooth right alongside Apple devices in the Find My app. 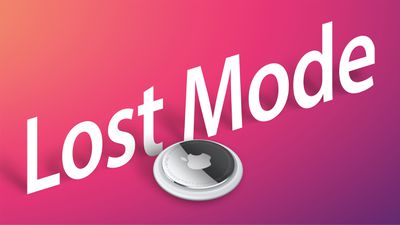 ‌AirTags‌ can be tracked using the Items tab in ‌Find My‌, and just like your Apple devices, if one should become lost, you can put it in Lost Mode to locate it. If an AirTag is nearby, it will connect to an Apple device over Bluetooth to relay its location, and there's even a Precision Finding feature on the iPhone 11 and 12 that uses the U1 chip for finding items that are misplaced close by.

An AirTag that's out of range can still be tracked using the ‌Find My‌ app, but it won't rely on the Bluetooth signals from your own device. Instead, the ‌‌‌Find My‌‌‌ Network takes advantage of nearly a billion Apple devices out in the world to help you locate your AirTag.

However, if an AirTag isn't nearby and there are no Apple devices in the area in which it's located, ‌‌Find My‌‌ will only be able to tell you where it was last seen on the map. In such cases, you can place the AirTag in Lost Mode. That way, if someone with an ‌iPhone‌ or Android device that has NFC comes across the item, they can help return it to you. Here's how it works.

How to Mark an AirTag as Lost

Now that the AirTag is marked as lost, anyone who finds it can bring it close to an NFC-enabled ‌iPhone‌ or Android phone and they will see a notification linking them to a website URL that contains your lost message and phone number. You may also be able to see the location relayed through someone else's device thanks to the ‌Find My‌ network.

If you are too stupid to lose a product you are utilizing to prevent you from losing its parent product, you deserve neither.

A person puts an AirTag in a piece of luggage and the Airline loses said luggage. The owner isn't stupid for attempting to take reasonable care to prevent loss from happening.

You shouldn't make such declarative statements without considering what you are saying.
Score: 7 Votes (Like | Disagree)

DrRadon
I would love to put it in my bike frame and be able to mark it as stolen rather than showing up on the iPhone of the thief’s as lost.
Score: 5 Votes (Like | Disagree)

If the airline... let's say, Southwest... loses the luggage... let's say, the latest Titelist titanium clubs... the person with the lost clubs has no control over said luggage, and the race is on for Southwest to track those golf clubs down, AirTagged or not.

How are AirTags solving a problem from 2020? Duh derrr

I pointed out that your all encompassing declarative statement was a poor statement. And 2020 has nothing to do with your previous statement much less this one.
Score: 2 Votes (Like | Disagree)

I would love to put it in my bike frame and be able to mark it as stolen rather than showing up on the iPhone of the thief’s as lost.

my thoughts exactly. i thought this would be great for finding my stolen stuff if it didn't alert the robber that it is getting tracked.
Score: 1 Votes (Like | Disagree)

HappySponge
Can i disable my phone from being used to locate someones airtags?
Score: 1 Votes (Like | Disagree)
Read All Comments