iPhone 8 Plus vs. iPhone 7 Plus Buyer's Guide

Apple at its annual September event introduced the iPhone 8, iPhone 8 Plus, and iPhone X. 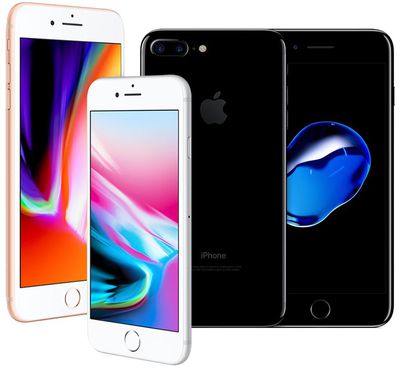 iPhone 8 Plus on left and iPhone 7 Plus on right
iPhone X is Apple's new flagship smartphone, with a radically redesigned edge-to-edge OLED display and a TrueDepth front camera system with Face ID facial recognition, but it's also considerably more expensive at $999 and up.

iPhone 8 and iPhone 8 Plus are the natural successors to the iPhone 7 and iPhone 7 Plus. The devices aren't dramatically different, but start at $699 and share many improvements like faster A11 Bionic chips and wireless charging.

If you have an iPhone 7 Plus, or are considering purchasing one, you may be wondering how the year-old smartphone stacks up to the iPhone 8 Plus. For that reason, we've created a list of new and unchanged features and tech specs.

iPhone 8 Plus vs. iPhone 7 Plus: What's Similar?

iPhone 8 Plus vs. iPhone 7 Plus: What's Different?

The key new features of the iPhone 8 Plus include a new glass-backed design, True Tone display, faster A11 Bionic chip, wireless charging, fast charging, 4K video recording at up to 60 FPS, and Bluetooth 5.0.

All in all, those features make the iPhone 8 Plus a considerable upgrade over the iPhone 7 Plus, which is perhaps why Apple skipped over calling it the iPhone 7s Plus. Alongside the iPhone X, it's an option worth considering.

The key new features of the iPhone 8 Plus include a new glass-backed design, True Tone display, faster A11 Bionic chip, wireless charging, fast charging, 4K video recording at up to 60 FPS, and Bluetooth 5.0.

All in all, those features make the iPhone 8 Plus a considerable upgrade over the iPhone 7 Plus, which is perhaps why Apple skipped over calling it the iPhone 7s Plus.

Two of those features (wireless and fast charging) require additional hardware that are sold separately. Glass-back and Bluetooth 5.0 do not really change your common use cases. That leaves us with True Tone display and A11 Bionic. I personally think this is an "S" upgrade.
Score: 17 Votes (Like | Disagree)

Mi1lion
Thanks for doing a deep comparison between the two. Definitely useful.
Score: 9 Votes (Like | Disagree)

tkukoc
What! There's no way this is a considerable upgrade over 7 Plus. They are almost the exact same phone. All devices this year.. yes even the iPhone X are minor upgrades. There's zero applications pushing the last couple generations to the edge. The only resource hog is the system itself, which is very much in need of a full redesign! With the home button being retired, one can only hope next year is when IOS gets taken seriously. They need power user settings, enough with the hand holding! Their user base grew up, time for the system to grow up too, the bandades method is really starting to show.
Score: 7 Votes (Like | Disagree)

RightMACatU
For me, Apple signaled that the 8/8+ are the last of their kinds. The new game in town is the X and this should be re-informed with next year's release.
Score: 7 Votes (Like | Disagree)

levitynyc
Its definitely not worth the upgrade form the 7 plus in my opinion.

My main complaint about the 7 plus is the chin and bezel. The 8 plus makes it even worse by being slightly thicker.

No thanks.
Score: 6 Votes (Like | Disagree)
Read All Comments