Though designed for the iPhone, Apple's AirPods are also compatible with Android smartphones and tablets, so you can take advantage of Apple's wire-free tech even if you're an Android user or have both Android and Apple devices. 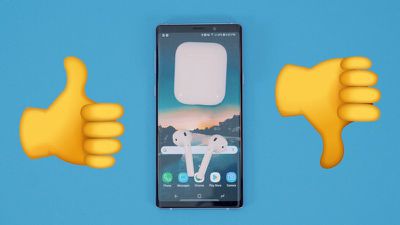 You do, of course, lose some bells and whistles like Apple's unique AirPods pairing features. AirPods work like any other Bluetooth headphones on an Android device, and there are ways to restore at least some of their functionality through Android apps.

AirPod Features That Don't Work on Android (Out of the Box)

When paired with an ‌iPhone‌, iPad, Apple Watch, or Mac, the AirPods offer a rich set of features thanks to the W1 wireless chip in the first generation version or the H1 chip in the AirPods 2 or AirPods 3, the accelerometer and other sensors, and deep integration with Apple's devices.

Here's a list of AirPods features you lose out on when using the AirPods with Android:

AirPod Features That Work on Android

Out of the box, AirPods functionality on Android is quite limited, but the double tap or press feature works. When you double tap on one of the AirPods (or press on the Force Sensor on the stem with ‌AirPods 3‌), it will play or pause the music. If you've customized your AirPods using an iOS device, next track and previous track gestures will also work, but ‌Siri‌ won't, nor will "Hey ‌Siri‌" on AirPods 2 or ‌AirPods 3‌ as that requires an Apple device.

One additional benefit to AirPods on Android -- Bluetooth connectivity distance. AirPods generally have a much longer Bluetooth range than other Bluetooth-enabled headphones, and this is true on both Android and iOS.

AirPods lose the rest of their unique functionality on Android, but there are a few Android apps that are designed to restore some of it, adding to what you can do with AirPods on Android.

How to Add Back Lost AirPod Functionality

AirBattery - AirBattery adds a feature that lets you see the charge level of your AirPods. It includes battery levels for the left AirPod, right AirPod, and charging case, much like the battery interface on iOS devices. It also has an experimental ear detection feature when used with Spotify, which can pause music when you remove an AirPod.

AssistantTrigger - AssistantTrigger also lets you see the battery level of your AirPods, and it also says it adds ear detection features. Most notably, it can be used to change the tap gestures, letting you set up Google Assistant to be triggered with a double tap.

How to Pair AirPods to an Android Smartphone

AirPods pair to an Android smartphone like any other Bluetooth device, but you there are some specific steps to follow.

After tapping "Pair," the AirPods should successfully connect to your Android device.

Do AirPods Work on Android?

Even if you use Android devices exclusively, the AirPods are a great wire-free earbud option that outperform many other Bluetooth earbuds available for Android devices. If you have both Android and iOS devices, AirPods are a no brainer because you'll be able to use them on both devices with few tradeoffs if you download the appropriate Android apps.

Even without many of the bells and whistles available on iOS devices, AirPods have some attractive features that may appeal to Android users, though there are wire-free Android specific options that Android users might want to look at.

Many AirPods users find them to be quite comfortable and stable in the ears, with little risk of them falling out, and the battery life is absolutely appealing. Apple in 2021 introduced the ‌AirPods 3‌, which have a more refined fit that's even more comfortable in the ears. AirPods have a charging case that provides 24 hours of battery life in a portable, compact form factor. The case is also easy to charge, so long as you have a Lightning cable.

There's one major reason that you might want to avoid AirPods on Android, and that's audio quality. Apple's AAC codec does not perform as well on Android as it does on the ‌iPhone‌, so there may be degraded streaming on Android because of the way Android handles Bluetooth codecs.

I actually didn’t know the AirPods would operate on an android device. I think the most convenient thing about the AirPods, is how seamlessly they pair with the iPhone and they’re ready for use. And I like that it does show you the charging level indicator for the AirPods and the battery case separately. Still one of my favorite products from Apple when they launched in December 2016.

Pairing from Bluetooth devices is nearly always easy and seamless. Push pair on AirPod case select on phone, that’s it! Not necessary to build such a story about it
Score: 4 Votes (Like | Disagree)

PLondon
I use mine all the time with my Pixel 3XL and also with a PixelBook and the Huawei Mate book X Pro as well as my Macs, iPad and iPhones. It works great with all of them.

Of course no one would ever miss Siri and you can actually get apps to use Google assistant if you want to. One more added advantage is that you can use just one headphone without it auto pausing like it does on the iPhone I use just one all the time for phonecalls so that's an important feature for me.

I can highly recommend them for any Android users.
Score: 3 Votes (Like | Disagree)

The old circular profile Apple headphones fit and stayed in my ears perfectly. The newer iPhone 4 era parabolic shape only fits in my right ear and pops out of my left ear immediately. I was pretty bummed out when they made the airpods based on that fixed shape, instead of a more form-fitting soft polymer interface. So I wait and see.

There a bunch of tutorials out there on cutting to fit some of those foam earbud covers so they fit on people with larger ears. You could try it out for just one of your ears.
Score: 1 Votes (Like | Disagree)

Short answer - absolutely.
It's convenient, it's motivational (with paid monthly programming, of course), it is quick to yield results (depending on your lifestyle/discipline/diet), and relatively low-impact.
I've had other equipment, such as a treadmill, squat-rack/bench combo, & the usual free-weights, bands, what-have-you's - but no other piece of equipment has gotten as much use and certainly hasn't had the impact the Peloton has.

For the ugly truth though - if you want one, you surely know the price. Upfront cost of the bike, plus monthly subscription; although they now offer monthly payments of both bike and subscription wrapped into one price. For my household, it's perfect though - cheaper than two adult gym memberships. One bike can have at least two accounts, and I believe far more (4-6?).

There are many, many positive things I could say about it, but I'll leave it at that. And you can use your AirPods with it. ;)

Thanks for the info! I stay in good shape and am really into biking for cardio, so I would love to have one of these.
Score: 1 Votes (Like | Disagree)

xpusostomos
A lot of misinformation here. Automatic switching is not a thing. Apple put the switch function in a convenient place, but Android is about as convenient. Also I listen with one airpod on Android all the time. Not sure what you're on about. The only genuine downside is airbattery, the Android app has to be restarted all the time, so ear detection ends up not always working, which isn't the end of the world.
[doublepost=1547373888][/doublepost]

When I first got my AirPods pairing was nothing more than opening the case. It was so simple. For some reason that changed when I recently paired them to my 2018 iPad Pro which required me to press the button on the case. I’m not sure when this changed.

Are you signed into iCloud on both devices? You're supposed to swipe up the screen and select the airport from the Play controls
[doublepost=1547374033][/doublepost]

I actually didn’t know the AirPods would operate on an android device. I think the most convenient thing about the AirPods, is how seamlessly they pair with the iPhone and they’re ready for use. And I like that it does show you the charging level indicator for the AirPods and the battery case separately. Still one of my favorite products from Apple when they launched in December 2016.

Once you pair the first time, it's just as easy with Android, even if you want to switch devices.
[doublepost=1547374139][/doublepost]

I have no idea what you are talking about with the last sentence. My point was, any bluetooth headphones, speaker, takes barely any effort to connect. The W1 chip causes as many problems as it fixes (many times I've had to reboot the headphones or reboot the phone to get it to connect).

How to Double the Brightness of Your MacBook Pro Display