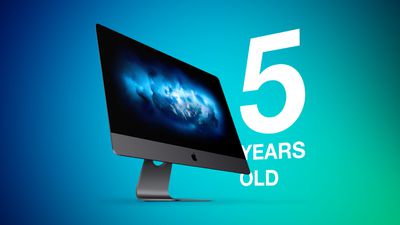 In April 2017, Apple uncharacteristically apologised for its approach to the Mac in recent years and pre-announced it was working on a "completely rethought" ‌Mac Pro‌ with a modular design, a new pro-level ‌iMac‌, and a new high-end external display. At WWDC that year, Apple unveiled the ‌iMac‌ Pro, after years of rumors about a "Pro" ‌iMac‌. The ‌iMac‌ Pro sought to placate many of Apple's discontented professional Mac users, coming around four years after the launch of the controversial "trashcan" ‌Mac Pro‌, but two years before the current ‌Mac Pro‌, which returned to a modular tower design.

Apple presented the ‌iMac‌ Pro as "the most powerful Mac ever made." It featured 8-, 10-, 14-, or 18-core Intel Xeon processor options, a 5K display, AMD Vega graphics, ECC memory, and 10 Gigabit Ethernet, with a starting price of $4,999. It was also the first Mac to contain a custom T2 chip, as well as the first desktop Mac to be available in Space Gray. While it did not have a slot to easily access the memory like the 27-inch ‌iMac‌, the processor, memory, and storage were not soldered in place and could easily be removed if the display was disassembled.

In March 2021, Apple announced that it was discontinuing the ‌iMac‌ Pro. By that time, the machine had been surpassed by the 2019 ‌Mac Pro‌, a significant final update for the 27-inch ‌iMac‌, and the first Apple Silicon Macs. The ‌iMac‌ Pro's position in Apple's product lineup is now effectively held by the Mac Studio and the Studio Display.

Yet after the launch of the 24-inch Apple silicon ‌iMac‌ in April 2021 and the discontinuation of the 27-inch ‌iMac‌ in March 2022, interest in an ‌iMac‌ Pro with a larger display has again spiked. Bloomberg's Mark Gurman believes that Apple is still "working on a larger-screened ‌iMac‌ aimed at the professional market," a rumor supported by Apple analyst Ming-Chi Kuo. Yet other reports claim Apple has no plans to release a new high-end ‌iMac‌ at all.

diggy33
I started a new job last October, and was walking through our warehouse late December and spotted one on the shelf. It had a cracked screen, and the stand was slightly bent. The screen damage was actually in the bezel, not on the display, so I took it and powered it on. Come to find out, it had about 2 weeks left of AppleCare+ warranty coverage. I called Apple and scheduled the repair, and for $99 they replaced the screen and stand; I've been using it for work ever since and its still a beast. 14-core, 64GB of RAM. I'm going to use it until I cant anymore.
Score: 10 Votes (Like | Disagree)

stocklen
thats just it though...

IF apple ever *need* to release a bigger screen iMac, it will always be for the "pro" market and with a price tag to match.

I think theres a very significant reason that the 24" iMac wasnt launched in conjunction with a bigger screen model... and those who are *still* waiting (nearly 2 years later) I think will be disappointed that it just isnt coming... at least one aimed for the "home" market.

As the article states... apple very much cater for the "pro" market with the Mac Studio and Studio display. "home" users who want the bigger screen also have the option of the studio display paired with a mac mini.

BvizioN
The fabric of time is a scary stuff. Feels like yesterday!
Score: 6 Votes (Like | Disagree)
Read All Comments