Apple will not launch an iMac Pro or a Mac Pro until 2023, while it still plans to release a 27-inch external display without mini-LED sometime this year, renowned Apple analyst Ming-Chi Kuo said today on Twitter. 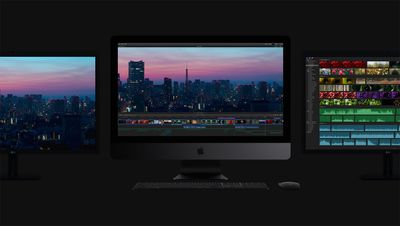 Outlining his predictions for Apple's Mac lineup in 2022 and 2023, Kuo said that Apple plans to release a new high-end Mac mini and a 27-inch external display without mini-LED in 2022, while an Apple silicon ‌Mac Pro‌ and ‌iMac‌ Pro will not launch until 2023.

Kuo's prediction that Apple does not plan to release an ‌iMac‌ Pro until next year is at odds with information shared by display analyst Ross Young. Young, who also boasts a credible track record regarding Apple products, has said an ‌iMac‌ Pro could launch as soon as June this year.

The ‌iMac‌ Pro is expected to replace the 27-inch Intel-based ‌iMac‌ currently in the lineup and be sold alongside the 24-inch desktop computer announced in April 2021. Young has said the ‌iMac‌ Pro will feature mini-LED and previous rumors suggest a similar design to the 24-inch size.

Given the large discrepancy between the information shared by both Kuo and Young, it could be plausible that the analysts are referencing different devices.

Kuo could be referencing a true professional-grade ‌iMac‌ at the highest-end of the lineup, while details put forth by Young are simply referencing a non-pro ‌iMac‌.

It's worth noting that Apple had previously used the "‌iMac‌ Pro" name in a now-discontinued ‌iMac‌, and despite one rumor suggesting the company will resurrect the name, it's debatable whether Apple will use the name again.

In the more immediate future, Kuo says that Apple plans to release an affordable display for consumers this year. Kuo says the display will measure 27-inches in size and not feature mini-LED. Just today, Mark Gurman noted that it's likely the display could be announced during the Apple event on Tuesday.

Kuo also confirmed today that Apple will launch a new high-end ‌Mac mini‌ this year and it's also expected to debut during next week's event. See our guide for a full rundown of everything we expect from Apple next week.

MacRumors has been able to confirm it is Kuo himself.

Does this go something along these lines:

walnuts
Waiting more than 2 years into the Apple silicon transition for any 27 inch iMac seems strange to me (and I’m biased cause I want one.) I guess another possibility is a “normal” 27” iMac this year with a pro version next year?
Score: 11 Votes (Like | Disagree)

Lounge vibes 05
That’s cute.
Meanwhile, Timothy cook himself has said the transition will be completed within two years.
Ross Young, who has a 100% track record, has said that a mini LED 27 inch iMac will launch sometime in the summer.
And all other reports conclude that the Macpro will launch at the end of the year with four M1max’s.
So… Quo, if that really is you, I think that you are off the mark with this one
Score: 9 Votes (Like | Disagree)

Some people wanted a more affordable display from Apple.

This conventional 27” LED display is it.

A 32” sounds nice, but from a practical standpoint, will be difficult to sell. Many desks simply don’t have room to accommodate such a large display.

I’ve said it before, and I’ll say it again. Most of the people saying they want a 32-inch super-resolution monitor probably would not pay the price Apple would have to charge for it.
Score: 8 Votes (Like | Disagree)

Does anyone has any proof that it’s actually him behind this account?

MacRumors has been able to confirm it is Kuo himself.
Score: 8 Votes (Like | Disagree)

alpi123
Doesn't make sense for someone who has been leaking Apple info before (and being careful with not getting caught) to just hop on Twitter and start leaking there too. It has to be a gimmick account.
Score: 8 Votes (Like | Disagree)
Read All Comments

Wednesday December 22, 2021 2:01 am PST by Sami Fathi
The upcoming 27-inch iMac redesign will not feature a display with mini-LED but will instead keep the LCD panel previously used, according to industry sources cited today in a report from DigiTimes. The report said that while "speculation about the next-generation 27-inch iMac coming with a miniLED display" has been circulating for some time, the new all-in-one desktop machine will, in fact, ...
Read Full Article • 112 comments