During Google's latest launch event, the company made multiple references to Apple and the iPhone 14, iOS 16, and Apple's reluctance to adopt support for RCS messaging. 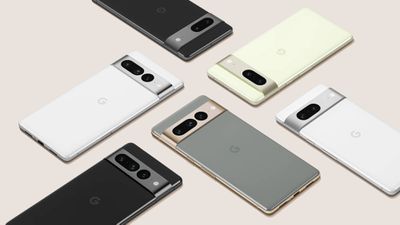 Google yesterday held an event where it announced the Pixel Watch, Pixel 7 and Pixel 7 Pro, and offered new details on the Pixel Tablet. During the event, some presenters couldn't help but take a few jabs at Apple and some of Cupertino's latest announcements.

"Pixel has always been a leader in smartphone innovation," said Brian Rakowski, Google's vice president of product management, speaking about Pixel 7 and Pixel 7 Pro. "We take it as a compliment when others in the industry follow our lead, like the always-on display and At a Glance, putting useful information right on your Lock Screen," Rakowski continued, alluding to Live Activities on ‌iOS 16‌ and the iPhone 14 Pro's always-on capabilities.

"We introduced Car Crash Detection three years ago along with other important ways to keep you safe, like safety check and emergency sharing," Rakowski said during the event. Last month, Apple introduced Car Crash Detection with the ‌iPhone 14‌, ‌iPhone 14 Pro‌, and the latest Apple Watch models, and ‌iOS 16‌ brings Safety Check to users for their own personal safety. "It's an amazing track record of pioneering features that were first on Pixel," Rakowski concluded.

One of the biggest points of tension between Apple and Google is Apple's refusal to adopt RCS messaging support, the latest and increasingly more common standard for messaging. Apple continues to limit messaging on its devices to only the SMS standard and iMessage, despite public calls from Google for it to adopt RCS. Apple CEO Tim Cook has responded to those calls by saying it's not something Apple users are asking the company to do.

During Google's event, it once again put pressure on Apple to change course. "RCS is the modern industry standard for messaging, and it's already been adopted by most of the industry. We hope every device maker gets the message and adopts RCS, making texting better for every smartphone user."

samifathi
If Apple really followed Google’s lead all of Apple’s services would be discontinued by now…
Score: 120 Votes (Like | Disagree)

addamas
Is it me only or nobody heard about Car Crash Detection on Pixels which had already problem with dialing 112?
Score: 65 Votes (Like | Disagree)

MRrainer
As it's backed by Big G, you can expect both RCS' breakthrough as well as its imminent abandonment at any time in the next six months.
Score: 59 Votes (Like | Disagree)

sir1963nz
I think the saying goes like "Google does it first, Apple does it properly"
Score: 47 Votes (Like | Disagree)

CB1234
I am always wary of companies talking down their competitors.

It's almost as if they have to take a 'pop' at their competitors to make their own product sound better. Feels they are trying to justify themselves.

Competition is good to push boundaries of innovation, talking about competitors is not so good..
Score: 45 Votes (Like | Disagree)
Read All Comments