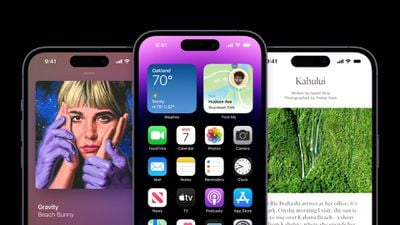 Prosser: No Camera Bump, Round Volume Buttons, and More

On September 8, 2021, Apple leaker Jon Prosser shared renders he claimed to have been for the "‌iPhone 14 Pro‌ Max," days before Apple was set to unveil the iPhone 13 lineup. In his renders, Prosser claimed that the ‌iPhone 14 Pro‌ Max would feature a flat back with no camera bump, round volume buttons, a single hole-punch notch replacement, and redesigned speaker and microphone grilles with elongated mesh cutouts instead of individual holes on the bottom of the device.

The renders turned out to be an inaccurate depiction of the ‌iPhone 14 Pro‌ Max, with Apple enlarging the camera bump to make room for more advanced cameras, Apple instead opting for a hole punch and pill-shaped notch replacement, and no change to the volume buttons or the speaker and microphone grilles.

A rumor early in the rumor mill suggested that the ‌iPhone 14 Pro‌ and ‌iPhone 14 Pro‌ Max would be offered in a 2TB storage configuration alongside the existing 1TB option. The rationale was that with the more advanced cameras, Apple would offer a larger storage option for photographers and videographers to store high-res content. That did not turn out to be the case as Apple is continuing to offer a 1TB option as the highest capacity ever in an iPhone with the ‌iPhone 14 Pro‌ series.

Rumored for the iPhone 12, then the ‌iPhone 13‌, and again for the ‌iPhone 14‌, Apple has yet to bring the latest WiFi standard to its ‌iPhone‌ lineup. WiFi 6E, compared to WiFi 6 supported on all of Apple's latest products, includes better support for crowded areas and better latency. It remains unclear why Apple has not yet adopted WiFi 6E support, but we could see it on the iPhones next year.

gaximus
MacRumors should have a page dedicated to rumor sources and their accuracy. This chart could then be used to mark articles on how likely they are to be accurate.
Score: 22 Votes (Like | Disagree)

JPack
Some of these rumors shouldn't make sense to anybody with higher order brain functions.

No camera bump? So Apple will double the thickness of the entire chassis?

Titanium? Use an expensive material that doesn't dissipate heat?
Score: 8 Votes (Like | Disagree)

But no, for real, dude is so cocky and throws stuff at a wall to link people to his clickbait articles. Can’t wait until he’s no longer a “source”.

Here’s hoping next year is accurate with USB-C charging!

I unfollowed him a long time ago. He’s wrong more often than he’s right. MacRumors shouldn’t quote him in the future or they’ll lose their credibility like he did.
Score: 8 Votes (Like | Disagree)

fakestrawberryflavor
I actually think someone is feeding Prosser with disinformation. Literally the exact opposite things are happening than his claims. No camera bump but we got a bigger one instead. Little hole punch cutout but we get a dynamic pill instead, round buttons but we still have rectangle ones, etc.

Wondering if apple leaks him fake stuff on purpose to put disinformation out there or if they are testing who does what with certain information to catch leakers. Either way, he's mostly full of it.
Score: 7 Votes (Like | Disagree)

But no, for real, dude is so cocky and throws stuff at a wall to link people to his clickbait articles. Can’t wait until he’s no longer a “source”.

Here’s hoping next year is accurate with USB-C charging!
Score: 7 Votes (Like | Disagree)
Read All Comments

Thursday August 4, 2022 6:05 am PDT by Sami Fathi
With August upon us, the countdown is officially on. We're just weeks away from when we're expecting Apple to announce the iPhone 14 lineup. Rumors of the next iPhone start early in the year, and as a result, some details about the upcoming device sometimes get lost in the crowd. Exclusive MacRumors iPhone 14 Pro renders by graphic designer Ian Zelbo To help MacRumors readers, we've created a ...
Read Full Article • 100 comments

Tuesday August 30, 2022 6:49 am PDT by Sami Fathi
As we inch closer and closer to Apple's "Far Out" event in a little over one week, more details about the upcoming iPhone 14 and iPhone 14 Pro are beginning to emerge, with the latest batch of alleged details laying out final expectations for the colors, performance, features, and more of the upcoming iPhones. The latest rumors come from the user "yeux1122" on the Korean blog Naver, who...
Read Full Article • 146 comments