Apple is aiming to triple its ad revenue from $4 billion per year to double-digit figures by expanding its advertising to more apps, according to Bloomberg's Mark Gurman. 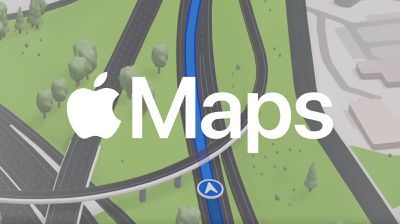 Currently, Apple ads appear in App Store app searches, where developers pay for promoted spots in results, as well as more standard ads that appear in the News and Stocks apps. Apple also generates revenue with commercials during MLB Friday Night Baseball streams, but now the company wants go bigger by expanding its ad presence across iPhone and iPad apps.

In the latest edition of his "Power On" newsletter, Gurman writes that Apple's VP of advertising platforms Todd Teresi wants to triple current ad revenue, and the first move to achieve that could be to bring ads to the Maps app. Apple has internally tested adding sponsored spots in Maps search results, reports Gurman, and if it does roll them out to Maps users, it could just be the beginning of a wider expansion.

Gurman speculates that Apple could also bring ads to the digital storefronts of its Books and Podcasts apps, while an even more lucrative revenue driver could be Apple TV+, if the company was to follow the lead of Netflix and Disney+ by providing an ad-supported tier.

Apple has already announced it will be expanding its advertising business reach in the ‌App Store‌, with new placements coming to the "Today" screen as well as to individual app pages, which will allow developers to pay for slots outside of the Search tab and search results for the first time.

However, Apple will be aware that even a gentle creep into other areas of Apple's software could mar the premium experience that users expect of its devices, while also leaving it open to increased criticism over its App Tracking Transparency (ATT) framework which has, by some accounts, had a substantial negative impact on both large and small businesses.

Apple's ATT tracking rules are currently under investigation in Germany under competition law to ascertain whether they are self-preferencing Apple or being an impediment to third-party apps. Apple has disputed suggestions that its ATT framework has unfairly benefitted the company to the detriment of third-parties.

Earlier this year it commissioned a study into the impact of ATT that was conducted by Columbia Business School's Marketing Division. The study concluded that Apple was unlikely to have seen a significant financial benefit since the privacy feature launched, and that claims to the contrary were speculative and lacked supporting evidence.

Update: Apple engineers are already working on implementing search ads in the Apple Maps app, and the ads will be likely be visible next year, according to Gurman.

Total Respray
A part of the reason I pay the Apple premium is not to be bombarded with ads…
Score: 140 Votes (Like | Disagree)

Go down this road Apple and my next phone won't be iPhone.
Score: 78 Votes (Like | Disagree)

What, now I need to pay for an ad free version of Maps? /smh
Score: 37 Votes (Like | Disagree)

Killbill2
Keep your ads and stick them up your…
Score: 37 Votes (Like | Disagree)

tehabe
So I can stick with Google Maps. At least it supports bicycle routes for my region.
Score: 36 Votes (Like | Disagree)

Corsig
Can't think of a time I bought something because of an Ad especially on an app
Score: 36 Votes (Like | Disagree)
Read All Comments

Sunday August 21, 2022 10:34 am PDT by Joe Rossignol
Apple plans to begin showing search ads in its Maps app on the iPhone starting next year, according to Bloomberg's Mark Gurman. "I believe the engineering work is already underway to launch search ads in the Apple Maps app, and we should begin to see it be implemented sometime next year," wrote Gurman, in the subscriber-only version of his "Power On" newsletter today. Ads in the Apple...
Read Full Article • 555 comments

Friday July 29, 2022 11:12 am PDT by Sami Fathi
Apple today announced it is expanding its offering of how developers can promote their apps on the App Store, helping developers expand their reach and making it easier to discover more of what the App Store has to offer. Until now, Apple has offered developers two ad opportunities on the App Store: in the Search tab and within the Search results page. Both ad placements have been a...
Read Full Article • 79 comments

Wednesday May 11, 2022 9:59 am PDT by Joe Rossignol
Starting with iOS 15 and iPadOS 15, Apple introduced a new "Personalized Ads" toggle during the setup process that makes it easier for users to turn off personalized ads in Apple apps such as the App Store, Apple News, and Stocks. In a presentation shared with advertisers, obtained by MacRumors, Apple cited internal data showing that, in the first quarter of 2022, 78% of iOS 15 and iPadOS 15 ...
Read Full Article • 25 comments

Tuesday June 14, 2022 3:24 am PDT by Tim Hardwick
Germany's Federal Cartel Office, the Bundeskartellamt, has initiated proceedings against Apple to investigate whether its tracking rules and anti-tracking technology are anti-competitive and self-serving, according to a press release. The proceeding announced today will review under competition law Apple's tracking rules and specifically its App Tracking Transparency Framework (ATT) in order ...
Read Full Article • 113 comments

Friday August 5, 2022 9:17 am PDT by Juli Clover
Apple has been working to expand its updated Apple Maps app to additional countries, and has started testing the revamped design in Israel, Palestine, and Saudi Arabia, according to Maps expert Justin O'Beirne. It will be the sixteenth expansion of the updated Apple Maps design since the update first rolled out in September 2018. Apple in 2020 completed its U.S. rollout, and has since...
Read Full Article • 40 comments

Thursday September 22, 2022 5:12 am PDT by Sami Fathi
Meta is facing a new proposed class action lawsuit that accuses it of tracking and collecting the personal data of iPhone users, despite features and policies made by Apple which are meant to stop that same type of tracking. In August, it was revealed that with the Facebook and Instagram apps, Meta can track all of a user's key taps, keyboard inputs, and more, when using the in-app browser....
Read Full Article • 165 comments